iQOO 8 series of smartphones will be arriving later this month, but details about the upcoming devices continue to surface on the web. The upcoming lineup was recently spotted on Geekbench. The Geekbench listing gave us a clearer understanding of what the series has to offer in terms of specifications. Furthermore, the series includes two devices, the iQOO 8 and the slightly larger iQOO 8 Pro. iQOO 8 series will launch in China on August 17 at RMB 5,299 ($818).

Moreover, the smartphone brand from China has left no stone unturned in a bid to create hype around its upcoming phones. iQOO has released a slew of teasers that hint at the device’s features. As expected, the phones will boast slightly improved features as compared to their predecessors, the iQOO 7 series. The Pro model will sport a 2K AMOLED display with a refresh rate of 120Hz, 50W wireless charging. Under the hood, the phone will pack a Qualcomm Snapdragon 888+ SoC.

The standard iQOO 8 smartphone will boast toned-down specifications. In other words, it could come with an FHD+ display, a Snapdragon 870 chipset, and support 120W fast charging. Moreover, iQOO will team up again with BMW Motorsport for its upcoming smartphones. The iQOO 8 Pro, on the other hand, boasts an impressive array of features such as a 2K E5 AMOLED LTPO 10bit display that offers a refresh rate of 120Hz. This will switch between 1Hz and 120Hz based on the content displayed on the screen. 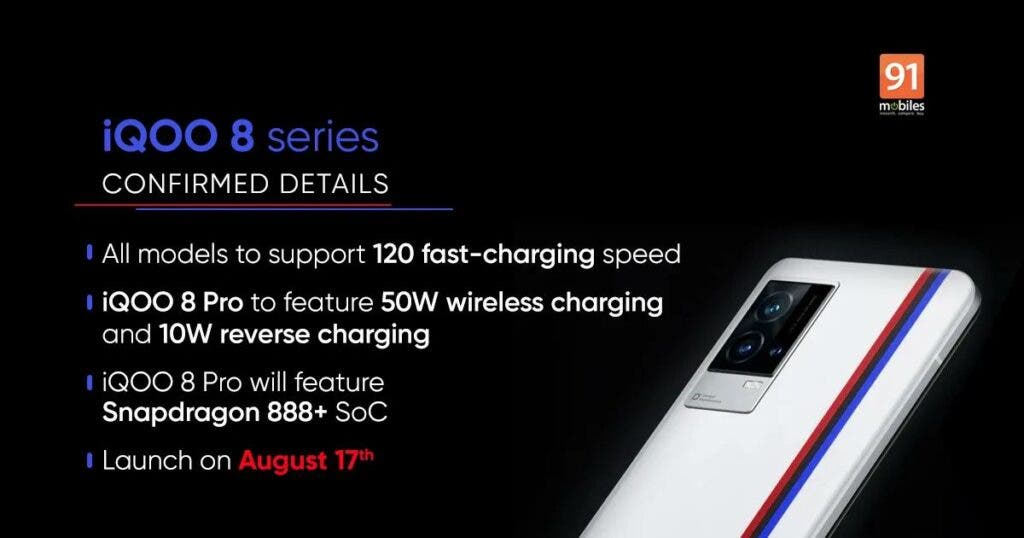 Furthermore, there’s a punch-hole cutout at the center and narrow bezels. Details about the exact display sizes are still few and far between. The Pro model could pack a Snapdragon 888 Plus SoC. However, the standard variant may feature a Snapdragon 870. Aside from that, the two devices could run on Android 11 out of the box with an iQOO custom skin on top. Aside from that, the series will come with 120W fast-charging support. the Pro variant will support 10W reverse charging, and 50W wireless, according to a Weibo post.

The iQOO 8 Pro will feature three cameras at the back. This includes a 50MP main camera, 48MP ultra-wide-angle lens, and a 16MP camera with a 14mm-60mm focal length. The rear-mounted cameras will support VIS five-axis anti-shale micro-cloud gimbal stabilization. If rumors making the rounds online are anything to go by, it will ship with 12GB of LPDDR5 RAM and offer a hefty 256GB UFS 3.1 storage. Moreover, the phone could come with a virtual RAM of 4GB. Regrettably, details about the standard model are still scarce.

The company released a poster image showing the Pro variant with a punch-hole cutout at the center. On top of that, it appears to have curved edges. The right spine houses the volume rocker and the power button. Both models could feature an in-display fingerprint sensor. The Pro variant may sport BWM logo stripes on the back panel.