Xiaomi Mi 11T, and the Redmi K40 Ultra smartphones have been subject to a new leak that sheds light on their specifications. The Chinese smartphone manufacturer announced the Xiaomi Mi 10T, and its Pro variant with Snapdragon 865 SoC back in October 2020. The word on the street is that the company is currently working on their successors dubbed, the Mi 11T and the Mi 11T Pro.

The latest entrant in the Xiaomi Mi 11 series, the Mi 11T passed through a new certification in Indonesia earlier this month. The phone was spotted with a MediaTek Dimensity chip bearing model number 21081111RG. Furthermore, the upcoming lineup could follow in the footsteps of its predecessors in terms of models. In other words, the series could include a standard, as well as a Pro model.

A Xiaomi phone with model number 2107113SG was spotted FCC database earlier this year. It was speculated to be one of the two Mi 11T series phones. Noted tipster Mukul Sharma had revealed that the Mi 11T Pro has already passed through the SIRIM certification in Malaysia. Sharma confirmed the moniker. Moreover, he reiterated that the FCC has certified the phone. Sharma pointed out that the Mi 11T is will launch soon in his tweet.

On August 16, Xiaomiui (@xiaomiui) revealed some key specifications of the Mi 11T smartphone. According to the tipster, the global and Indian Mi 11T version has the codename, Amber. Furthermore, the leaker suggests that the phone will sport a 20:9 display that offers a 120Hz refresh rate. Aside from that, a MediaTek chip will keep the entire system powered up. In the optics department, it will feature a triple camera setup. This includes a 64MP OmniVision OV64B main camera, a Sony IMX355 wide lens, and a telemacro camera with 3x zoom. 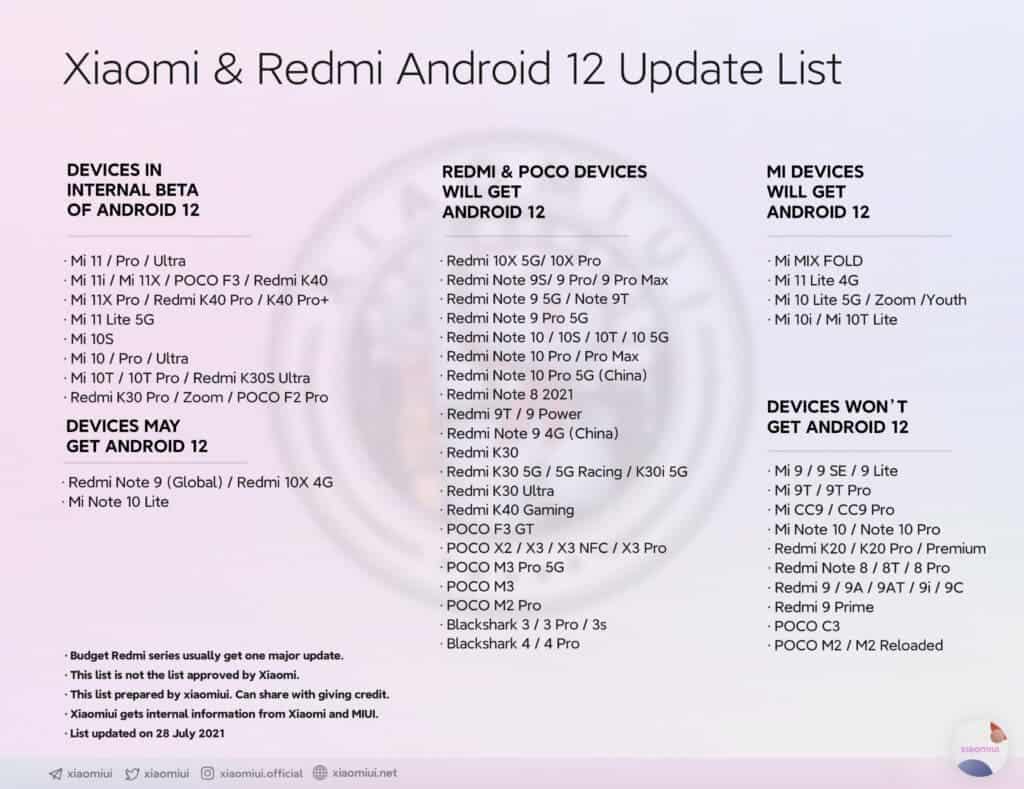 In a July 30 tweet, Xiaomiui had shared a list of Xiaomi and Redmi phones that will be receiving the Android 12 OS. The list featured the Mi 11, Mi 11 Pro, and the Mi 11 Ultra under the “devices in internal beta of Android 12” category. Interestingly, it had the Mi 10T lineup and the Redmi K30S Ultra smartphone as well. There is a possibility that Xiaomi Mi 11T could come running on Android 11 OS and receive the latest Android 12 update once it starts rolling out.

The Chinese tech company could launch a variant of the same device with the Redmi K40 Ultra moniker in China. The device has the codename, Agate. It features an aspect ratio of 20:9 with a refresh rate of 120Hz. The phone could pack a MediaTek chip under the hood. On the photography front, the device will house a triple camera setup. It will come with a 108MP Samsung HM2 main camera, a Sony IMX355 wide-angle lens, and a telemacro camera that supports 3x zoom. The phone will compete with OnePlus Nord 2 so, there is a possibility that it might come with a Dimensity 1200 chipset.

Next Over 70% of smartphones shipped in China supports 5G