Micromax is building a comeback in India since the last year. The company that was once one of the most relevant local smartphone makers lost an appeal in light of the “Chinese wave” of good smartphones that revolutionized the market. Last year, Micromax introduced the Micromax In series with an “Indian-focused” appeal. A couple of months ago, the company has introduced a new low-end smartphone dubbed Micromax In 2B. Now it is gearing up to introduce a new device that will carry Micromax In Note 1 Pro moniker. The first evidence we have about this device is a Geekbench list which reveals important specifications along with other key details.

According to the popular benchmarking platform, the upcoming smartphone will carry Micromax In Note 1 Pro moniker. The listing also shows that the smartphone comes with model number E7748. Interestingly, the same model has already cleared BIS Indian certification one year ago. Despite the listing, the device is yet to hit the market. We assume that Micromax had to change its release schedule with all the COVID-19 crises that affected the market.

As per the Geekbench listing, the new smartphone runs on Android 10. It could make sense for a smartphone that has been in development since 2020, but it’s not acceptable as we’re walking fast into the end of 2021. Especially, when Android 12 is about to be released. Hopefully, it will come with Android 11 at least, but I’m not very optimistic. 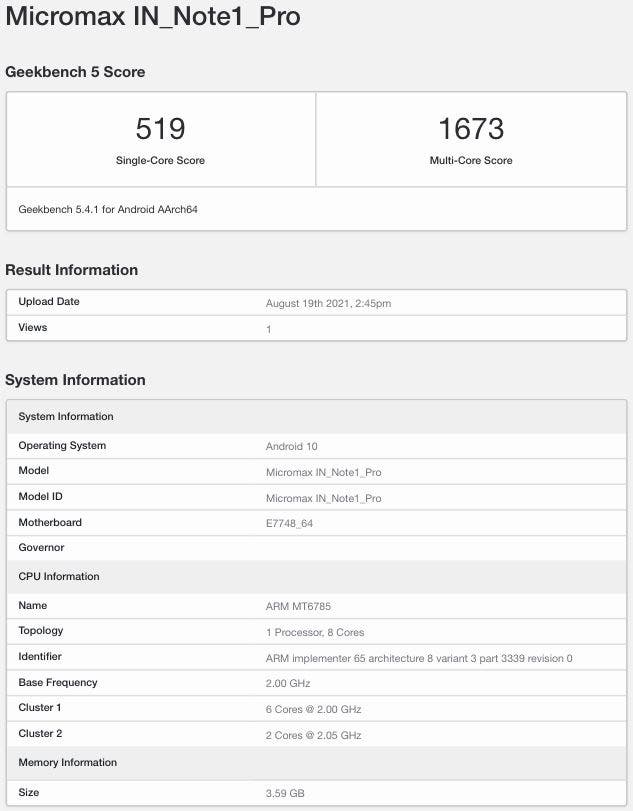 Moving on, the handset will be powered by the MediaTek MT6785 processor which turns out to be the Helio G90 SoC. This chipset offers two ARM Cortex-A76 cores clocked at up to 2.05 GHz plus six power-efficient Cortex-A55 cores clocked at up 2.0 GHz. For graphics tasks, the device carries a Mali-G76 MC4 GPU which can provide decent performance for games. Further, the benchmark also reveals 4 GB of RAM which is quite decent nowadays and better than what low-end phones tend to offer. The device scores 519 points in the single-core test and 1,673 points in the multi-core test.

Unfortunately, there aren’t details about display size, design, cameras, and battery capacity in this handset. We can expect something with a punch-hole design or waterdrop notch. The device may also stick with a gradient finish on the back.

For a quick comparison, the Micromax In 2B packs a 6.52-inch HD+ display. It also carries the Unisoc T610 SoC which is slightly below the Helio G90. The device has a simple 13 MP camera setup and draws powers from a 5,000 mAh battery with a USB Type-C port.