Today, OPPO announced a number of new technologies at the Future Imaging Technology Conference. Among them, OPPO announced that it will bring continuous optical zoom technology, which further improves the zoom experience. OPPO released the 10x hybrid optical zoom technology in 2019. The first smartphone model to use this technology is the OPPO Reno 10x zoom version. The Oppo Reno 10x zoom version comes with a 48MP + 8MP super wide-angle + 13MP periscope telephoto in its triple camera setup. The 48MP main camera as well as the periscope telephoto sensor have dual OIS. 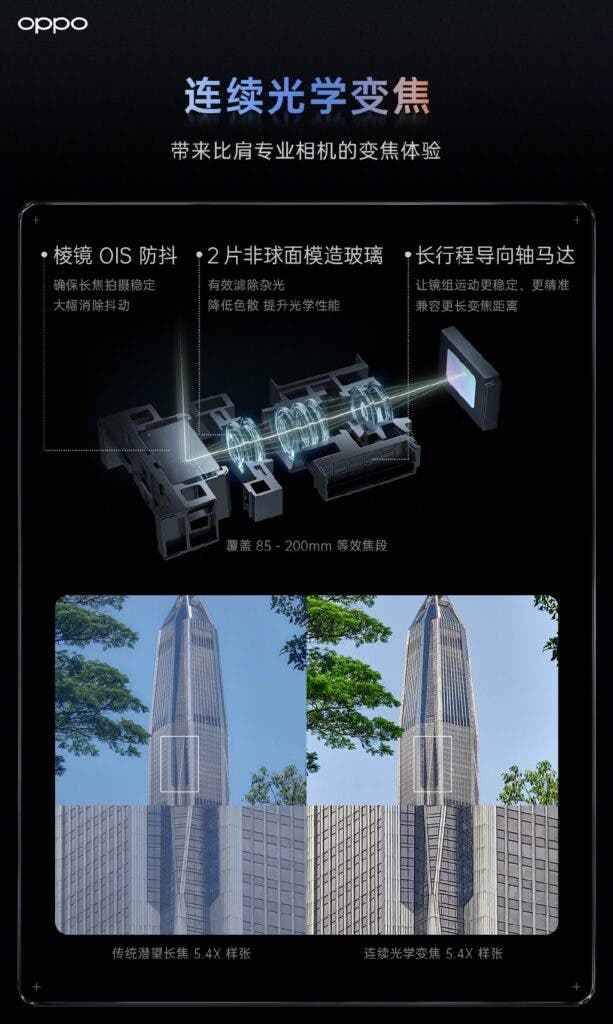 Other new technologies from Oppo

In addition to the continuous optical zoom technology, the company also released other technologies like the RGBW light-trapping sensor, five-axis anti-shake, and others. The RGBW light-trapping sensor increased the number of colours from three to four. It already has red, blue, and green and the RGBW now adds a white filter to the lineup. There is usually a loss of light with the pre-existing red, blue, and green filters. This eventually leads to a reduction in the brightness which lowers the overall quality.

According to Oppo, the new white filter solves this problem. The white filter will not lose light and the cast filter will irradiate more light on the CMOS. This eventually increases the brightness thereby reducing the noise in low-light environments. The overall effect of this technology is that it increases the sensor performance in low-light environments.

For the first time, Oppo’s RGBW solution writes the image algorithm into the sensor hardware. This is quite different from what the conventional RGBW sensor offers. Oppo’s solution also adds white pixels in the traditional RGGB pixel arrangement. Furthermore, the RGBW light-trapping sensor is also compatible with multiple chip platforms. In addition to improving processing efficiency, this technology also reduces power consumption.

Next Apple iPad 9 with Bionic A13 SoC is thinner & lighter