The Asus Chromebook Detachable CZ1 has surfaced on the web with some key details and images that give us a glimpse of the device’s design. The Taiwanese computer hardware company has been doing very well in the Chrome OS segment over the past few years. Asus has released MediaTek 2-in-1 devices with ARM processors and three Chromebooks that use the 11th generation Tiger Lake chip.

As a result, Asus has become a highly recommendable brand in multiple use-case and budgets. The much-awaited detachable Chromebook CM3 tablet packs the MediaTek Kompanion SoC under the hood just like the Lenovo Chromebook Duet. The Asus CM3 brings superior experience to the Chrome OS tablet segment with a display larger than the 10.1-inch Duet and a stowable stylus. Still riding high on the success of the CM3 tablet, it appears that Asus has released a rugged version of the aforesaid detachable.

The company will be targetting the education sector with its new Asus Chromebook Detachable CZ1. Asus has already created a landing page for the new device with a spec sheet that seems identical to its consumer-centric sibling, the Chromebook CM3 tablet. The tablet is “built to military-grade standards,” according to the description on the landing page. The Chromebook Detachable CZ1 is designed to handle the daily wear and tear of classrooms since it boasts a slew of rugged features. 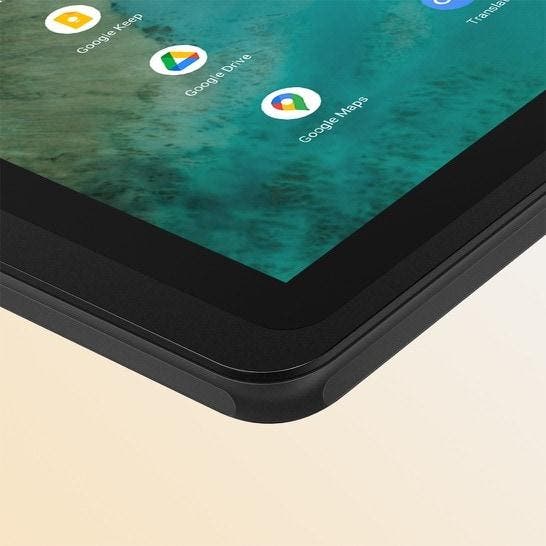 The tablet features a durable rubber trim around the outside. Furthermore, its 3-D texture reduces the appearance of fingerprints and accidental scratches. Moreover, the Chromebook Detachable CZ1 has an adjustable cover that can also be used as a kickstand. This is similar to the Asus CM3. On top of that, the company claims that the tablet can resist shock up to a 150 cm drop as long as the cover is in place. The panel can handle a whopping 15 kg of downward direct force. The USB port passed through the test of 5,000 cycle insertion and removal.

The Chromebook Detachable CZ1 surpasses the Chromebook 10e in terms of features, making it slightly better than Lenovo’s iteration like the Asus CM3. The Chromebook tablet 10e comes with a keyboard folio case that will set you back $50. It is worth noting that buying the keyboard folio case is optional. On the downside, it doesn’t have a trackpad. The EDU device could have turned out to be even better if it didn’t lack a trackpad. The CZ1 appears to feature a keyboard case. However, a touchpad isn’t visible.

The company has remained mum on the device’s pricing. However, there is a possibility that the Asus CZ1 will follow in the footsteps of the CM3 and retail for around mid-three hundred or a higher price range. Chrome Unboxed has reached out to Asus for more details on the release date and price. Aside from that, more details will surface online before the device’s official unveiling.