HMD Global started its journey with Nokia smartphones focusing in the mid-range and premium mid-range segments. The company, then, started to bring more smartphones into the entry-level segment. The company has made very good devices since its debut, but this year it has been focusing more on the entry-level segment. Rather than bringing the “version numbered smartphones”, the company has to bring G-series and X-series smartphones. As per reports, the company is preparing a new device under the Nokia G50 5G moniker.

During the last few weeks, the Nokia G50 5G has been the subject of multiple leaks. The device haad appeared on the retailer website last month. The retailer listing had revealed the possible specifications of the device ahead of launch. Now, the Nokia Mobile France Instagram channel had posted a short promo clip related to the Nokia G50 5G. The promo video reveals the design and specifications of the upcoming device. Interestingly, the video has been removed by Nokia. Apparently, it was published ahead of its time. 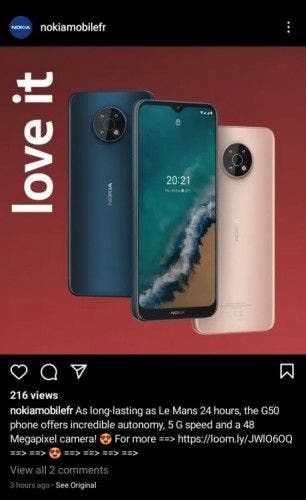 Although the video has been removed, the folks at NokiaPowerUser managed to grab some screenshots. Looking at the leaked material, the Nokia G50 5G will pack a Triple-Camera setup and Waterdrop notch. The main camera is a 48 MP primary main camera. The device will offer a long battery life and 5G connectivity. With “long battery life” in mind, we can expect something beyond 5,000 mAh capacity. The device will come in three colorways – Sand, Blue, and Forest Black.

According to past leaks, the device will feature a 6.38-inch LCD display. Under the hood, the smartphone will pack an Octa-Core Qualcomm Snapdragon 480 5G SoC. It also comes with 4 GB of RAM and 128 GB of Internal Storage. The main camera setup will have a dual-tone LED flash and we can expect an ultrawide and macro/depth sensor to be in the package.

Considering that the device’s launch is imminent, we can expect it to run Android 11 straight out of the box. Unfortunately, at the moment, this is everything we know about the handset. Other details regarding pricing and availability should be revealed in the coming weeks. Due to the fact that the device has been spotted on a French account, we can expect it to debut in France soon. However, it may also hit other markets in Asia such as Indonesia and India.