It is pretty common to have executives of big companies make some mistakes that could be pretty revealing. This is currently the case of Google’s Senior Vice President, Hiroshi Lockheimer. In a now-deleted tweet, Google Senior Vice President Hiroshi Lockheimer revealed various details about Google Pixel 6 Pro. Although the tween spent only a few minutes online, a few seconds is enough for “online police” to get a screenshot.

According to Hiroshi Lockheimer tweet screenshot, the device has a screen resolution of 1440 × 3200 and its connected to the Verizon 5G network. Most importantly, the tweet shows that this device comes with an on-screen fingerprint reader. Google Pixel 6 series smartphones will adopt a new industrial design and upgrade the rear camera system. The new camera system will come in a “camera tray”. 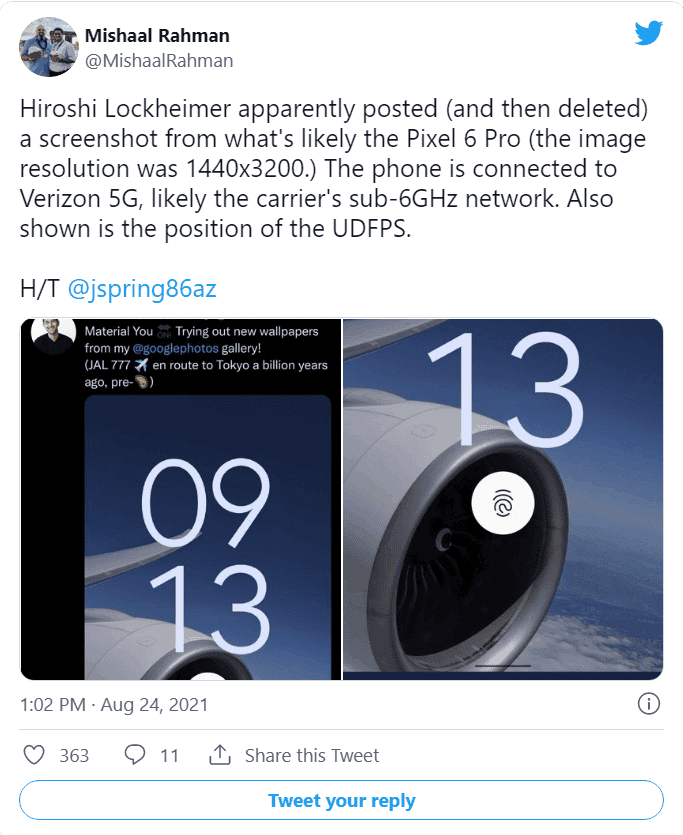 In addition, these devices have new materials and surface treatments. While the Google Pixel 6 Pro will use a light-colored polished aluminum frame, the Pixel 6 will use a matte aluminum finish. As you might expect, the new Pixel 6 phones will run Android 12 and use the new Material You design language. Google also revealed that Pixel 6 and Pixel 6 Pro will use the new Tensor SoC chip, this is Google’s first SoC customized for Pixel phones.

Next Vivo has become a leader in the Chinese smartphone market