Counterpoint Technology Market Research is reporting a significant shift in power in China’s smartphone market; which is the world’s largest sales region for smartphone devices.

Other smartphone manufacturers have benefited from Huawei‘s deterioration. Thus, Vivo became the leader in the local market. Its share at the end of the first and second quarters of 2021 was 24%. During April-June, Vivo sold about 18.3 million smartphones in China against 14.1 million a year earlier.

In second place in the ranking of the leading players is Oppo with a score of approximately 21%. Rounding out the top three is Xiaomi, which controls 17% of the Chinese smartphone market. 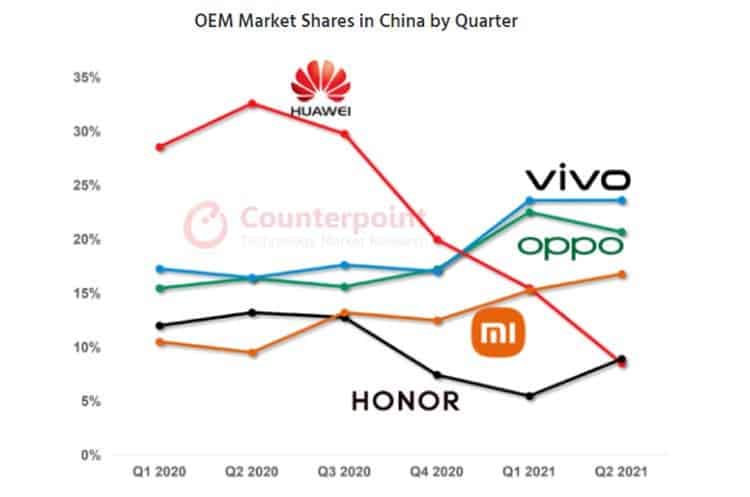 Vivo has become a leader in the Chinese smartphone market

“The COVID-19 pandemic has plunged the whole world into a chipset shortage which is not expected to end soon. Main chipset suppliers for mobile phones — Qualcomm, MediaTek and UNISOC — are seeing lengthening delivery lead times. As a result, they are only focusing on key accounts and also increasing prices, the latest being UNISOC with its average 25% hike. But with the BBK group’s powerful supply chain, Vivo can maintain a consistent supply of chipsets for its key volume segments — Y series and the newly launched S series. Within the Y series, there are 5G models available for as low as CNY 1,298 (~$200)”.

“On August 12, 2021, HONOR unveiled its flagship Magic 3 series, aimed at capturing the space vacated by the Huawei Mate and P series. However, its high prices have left many unimpressed. To Chinese consumers, a smartphone above CNY 4,000 is a segment reserved for a few, like Apple’s iPhone, Samsung’s S and Note series, and Huawei’s Mate and P series. This is because these brands have invested a lot over the years in promoting their flagship models as high-end phones with cutting-edge technology and innovation. As we know, Vivo has a series called NEX which is high on innovation, just like Xiaomi’s Mix series. Maybe Vivo can use this series to target the high-end segment”.

“With HONOR pushing ahead with its comeback and Xiaomi’s focus on the offline channels, the Chinese smartphone market will see fierce competition between Vivo, OPPO, Xiaomi, HONOR, Apple and keen-to-be-back Samsung in the coming days”.