While you always want more RAM, there is a certain minimum that makes smartphone users feel satisfied. A poll by the Android Authority portal showed how much will be enough for most smartphone owners.

Smartphones today, especially flagships, offer quite a bit of RAM paired with high-performance chipsets. If not so long ago the availability of 1-2 GB of memory was considered sufficient even for an expensive model, now 6 GB is considered by many to be an extremely ordinary level, and some require at least 16 GB.

The topic turned out to be extremely popular, almost 40,000 users wished to take part in the survey of the AndroidAuthority portal. The most popular were two options. The majority (32%) felt that 8 GB is sufficient for the time being. A significant number (25.9%) thought 6 GB would be enough. 15% of users are ready to be satisfied with 4 GB, and almost 20% require 12 GB or more.

Overall, the results are not surprising. 8 GB of RAM has become a common option even in mid-range smartphones, and most flagships on the Snapdragon 888 use at least 8 GB even in the basic version. Unsurprisingly, this was the most popular answer.

In the comments to the survey, users noted that “any company shipping an Android device with less than 4GB of memory will fail”, “4GB can work, but 6 won’t hurt .” Many people note that 4-6 GB is quite enough, and those who already use RAM of a larger capacity often mention that it is extremely rarely used in full and are very surprised at how many and what applications must be launched simultaneously in order to use up to 12-18 GB.

Read Also:  How much RAM is really enough for your Android smartphone?
Join GizChina on Telegram 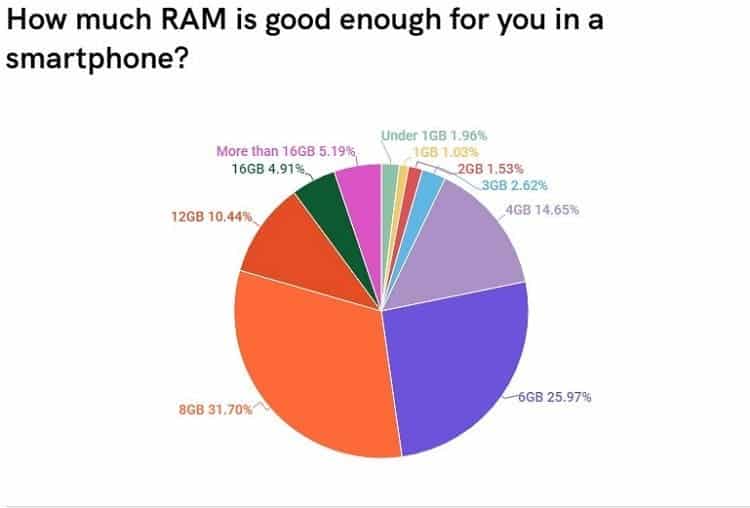 Virtual expansion of the RAM

One of the latest trends in the market is the virtual expansion of RAM by allocating additional volume of internal storage. This technology is already being practiced by companies like Huawei, Vivo, Nubia, OnePlus and Xiaomi. “Swap” of the RAM allows you to increase the speed of data processing; and launch several applications at the same time.

So, in Vivo X60 Pro they provided a mechanism that allows you to virtually increase the amount of RAM by 3 GB. So, instead of 8 GB and 12 GB, the user received 11 GB and 15 GB, respectively.

Oppo has also taken the next step in that direction with a 7GB increase in RAM. You need to understand that, in fact, the amount of RAM on the smartphone does not increase; but simply borrows a part of the built-in memory.

This allows RAM and sorage to exchange data with each other; and flexibly adapt to the scenarios that are running on the smartphone. But the more extended RAM the manufacturer offers, the less space there will be for storing your data.

Previous iPhone 13 will be more expensive than its predecessors