Vivo is well known for introducing new variants for some of its smartphone series after a certain time. It happened with the Vivo X60 series, that a couple of months after its release got a Vivo X60t variant. Apparently, the same will happen with the upcoming X70 series as a new Vivo X70t Pro smartphone is likely to appear sooner than expected.

It’s not a secret anymore that Vivo is gearing up to unveil three new smartphones in September. For now, we’re expecting a Vivo X70, X70 Pro, and Vivo X70 Pro Plus. The new flagship series from Vivo will feature the company’s first custom V1 Image Signal Processor (ISP). These devices are also said to bring the MediaTek Dimensity 1200, and Snapdragon 888 SoCs in tow. Now, it seems that Vivo is also preparing a Vivo X70t Pro as the device has visited the IMEI and Geekbench websites. The listing confirms the moniker and the model number along with some of its key specifications.

Vivo X70t Pro is yet another Dimensity 1200-powered smartphone

The Vivo X70t Pro is listed on the IMEI and Geekbench websites ahead of its launch. The IMEI listing confirms the smartphone moniker as Vivo X70T Pro and also reveals the model number V2135A. The smartphone is also listed on the Geekbench 5 website. According to it, the smartphone runs with a MediaTek Dimensity 1200 SoC. This is intriguing, after all, the vanilla Vivo X70 is expected to run with this very same chipset. For those unaware, it comes in a 1 + 3 + 4 arrangement. The performance cluster comes with 1 x Cortex-A78 core at 3 GHz, and 3 x Cortex-A78 cores at 2.6 GHz. The power-efficient cluster boasts four Cortex-A55 cores clocked at up to 2.4 GHz. 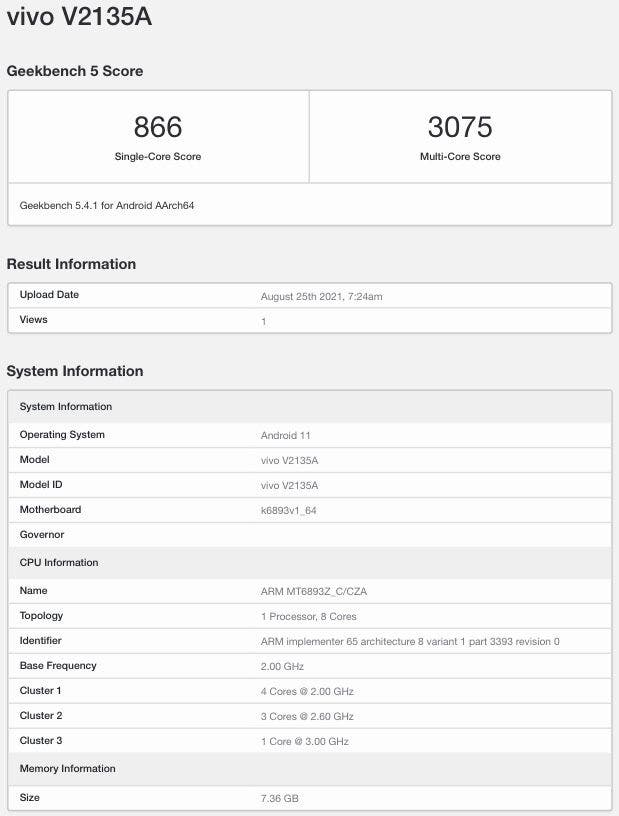 In addition to the chipset, Geekbench also revealed 8 GB of RAM and Android 11. The device will likely come with Origin OS 1 on top of Android in China. If it comes to other countries, then Vivo will put a Funtouch OS 11 layer on top of A11. The device scores 866 points in the single-core tasks and 3,075 in the multi-core department.

Since the chipset is similar, the device probably has other incremental changes over the regular X70 and X70 Pro. It may come with subtle differences in design, a flat display, and a Quad Camera setup on the back. The device will likely be an intermediary option between the vanilla X70 and the Pro variant. Of course, this is mere speculation at the moment. We need to wait for Vivo to shed some light in this case.

Worth noting, that if there is a Vivo X70t Pro we can also expect a vanilla X70t to appear soon or later.