According to Reuters, Qualcomm announced today that it will provide chips for Renault’s new electric vehicles for digital dashboard components. Qualcomm has previously reached a cooperation with General Motors to supply chips for car-machine systems. So this is the next big move to the car industry. Qualcomm said that the computing chip will be used in the Renault Mégane E-TECH electric car. The latter will also use an Android-based car-machine system. This electric car was unveiled today at the IAA Motor Trade Show in Munich, Germany, and is expected to go on sale in 2022.

This car is 4.21 meters long, has a wheelbase of 2.7 meters, comes with a large 20-inch wheel, and uses a hidden handle design. In terms of power, the entry-level version of the car has an electric motor of 96kW and a torque of 250N·m; the high-end model has an electric motor with a power of 160kW and a torque of 300N·m. The car accelerates from 100 kilometers to 7.4 seconds and has a cruising range of 470 kilometers. In terms of charging, the car supports a maximum of 22kW of AC charging power, and DC fast charging supports 130kW. The latter can supplement 200-300 kilometers of battery life in half an hour.

In fact, we are dealing with the new electric crossover, which is essentially a production version of last year’s Megane eVision concept. Of course, the manufacturer has made some minor changes. There is a switch to conventional side mirrors instead of cameras along with less flashy LED headlights and taillights.

This is an electric vehicle. So Renault has decided to redesign the interior as well. The all-digital dashboard takes after the Trezor, Symbioz, and Morphoz concepts by adopting what Renault calls the OpenR display shaped like an inverted “L.” 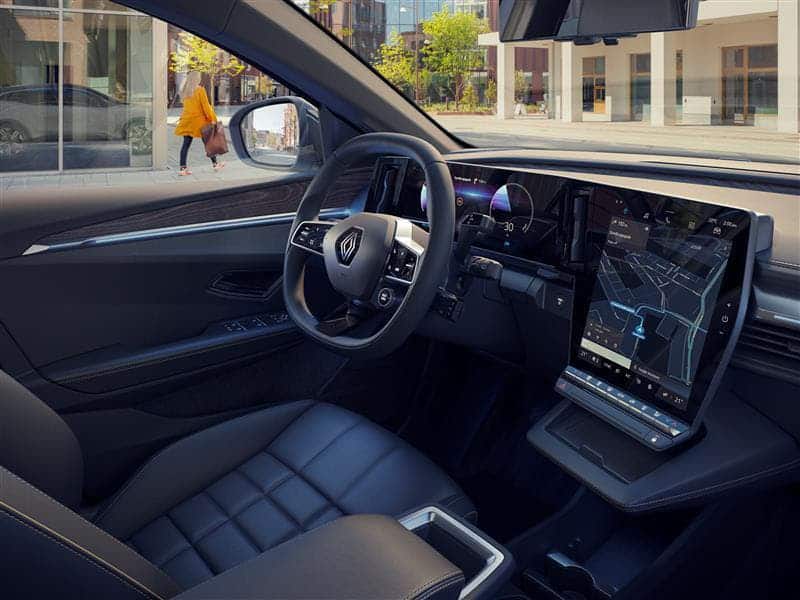 The car comes with a 12.3-inch screen, which is in the front of the driver. However, this display is complemented by a 12-inch touchscreen for the infotainment system on the higher-spec models. Also, this large display has a 1250 x 1562 resolution. In other words, it has the highest quality. There will be a cheaper Mégane E-TECH Electric version. It will come with a smaller 9-inch central display with a lower resolution.