The Realme GT Neo 2 has visited the Geekbench 4 website. The listing reveals some of the device’s key specifications ahead of the launch. The smartphone that appears on the benchmark website carries the model number RMX3370. It features a Qualcomm Snapdragon 870 SoC under the hood. The processor has a base clock speed of 2.42 GHz and is paired with Adreno 650 GPU. The CPU has some advantages over the MediaTek Dimensity 1200 on the first Neo, so the device will still be an upgrade. 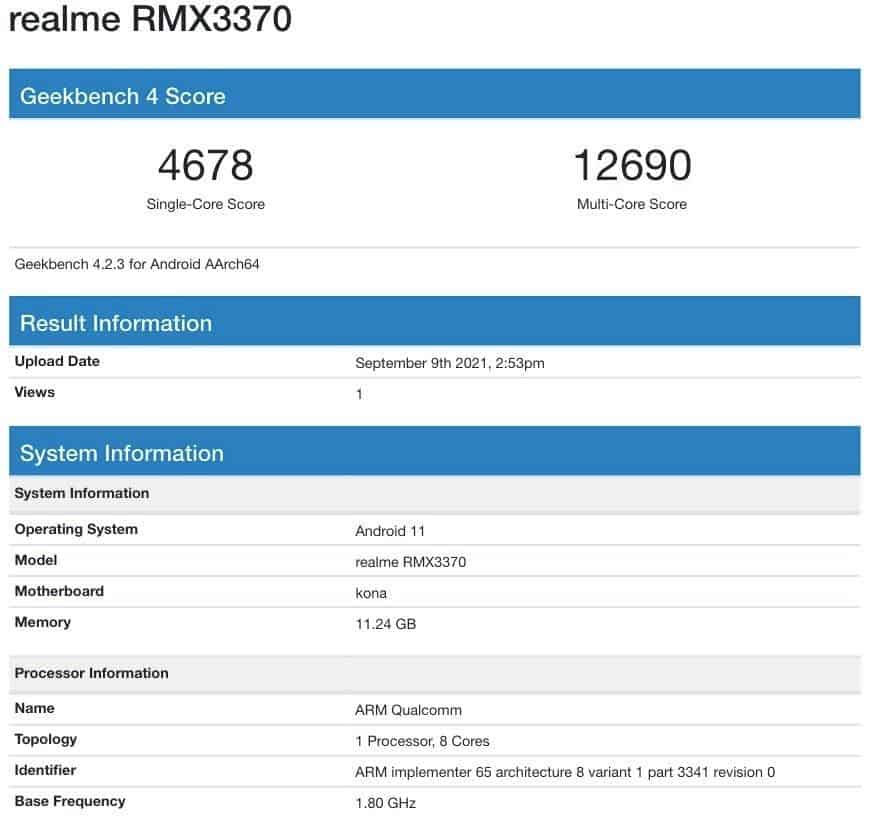 As per the Geekbench 4 listing, the device runs with Android 11 straight out of the box. We can assume it has Realme UI 2.0 on top of the underlying Android skin. The phone appeared in the benchmark website with 12 GB of RAM. It may also come in a base option with 8 GB of RAM. We don’t know how much storage the phone has, but we expect 256 GB of Internal Storage to be paired with this 12 GB of RAM option. In the listing, the Realme GT Neo 2 scored 4,678 in the single-core and 12,690 multi-core departments.

The phone recently visited the 3C website, which revealed that the device has 65 W fast-charging support. Other specifications of the phone were tipped before. As per the hints, the device sports a 6.62-inch Full HD+ display with a 120 Hz refresh rate. We can expect the panel to be AMOLED and have a top-left punch-hole cutout. Moreover, it will likely come with an in-display fingerprint scanner. Moving around to the back, the device is likely coming with a triple-camera setup. It will have a primary 64 MP shooter, an 8 MP ultrawide, and a 2 MP macro/depth sensor. This setup is common on Realme GT series devices. The selfie tasks should be ensured by a 16 MP front camera sensor. Furthermore, the Realme GT Neo 2 might sport a 5,000 mAh battery which will make it the device with the bigger battery in the series.

Previous iPhone 13: a retailer has revealed the colors and the storage capacities

Next Infinix smartphone with 108 MP camera and periscope lens leaked