Earlier this year, Honor has unveiled the Honor Play 20, an entry-level smartphone using the Unisoc T610 processor. The device arrived for the budget segment in a time when everyone was expecting Honor to unleash its first smartphones as an independent brand. It wasn’t the most anticipated device from the brand but served its purpose. Now, it seems that Honor is preparing a new variant for this Honor Play 20 series dubbed Honor Play 20 Pro. The device was listed and these listings reveal some key details about the handset.

For now, the Honor Play 20 Pro was spotted on an unnamed website. The listing shows that the smartphone comes with 8 GB of RAM and 128 GB of Internal Storage. However, we believe that the company will bring the Pro in other variants when it launches. Furthermore, the listing states that the device will come in three colorways – Titanium Silver, Magic Night Black, and Icelandic Fantasyland. 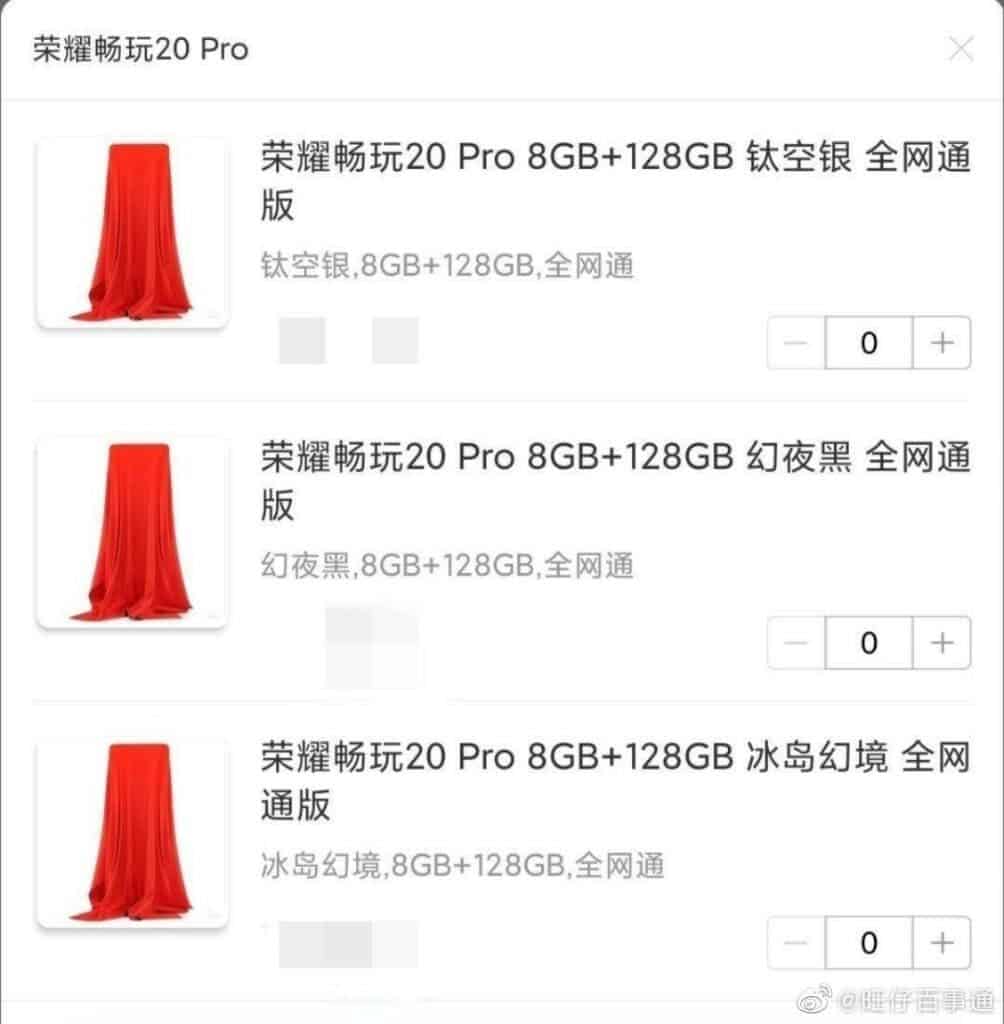 According to the tipster, @Jiwai Digital VVV, that found the listing, the phone will also sport a Unisoc processor. However, another Weibo user @Wang Tsai Know-how, states that this is not the case. He states the Honor Play 20 Pro will be a 4 G smartphone just like the Honor Play 20. He further states that the phone will come from CNY 999 ($155) to CNY 1,199 (~$186). This price is most likely for the basic model considering that the Honor Play 20 also arrived at a starting price tag of CNY 899 (~$139) and goes up for CNY 1,399 (~$217). The device can come with either a Snapdragon or a MediaTek chipset. However, we suspect that the latter will be preferred by Honor.

For comparison, the vanilla Honor Play 20 flaunts a 6.52-inch display with an HD+ resolution and a waterdrop notch. Under the hood, we have the Unisoc Tiger T610 Octa-Core which is similar to a MediaTek Helio G80 SoC. Moreover, it is paired with 8 GB of RAM that is a very generous amount for an entry-level smartphone. All RAMs variants come with the same 128 GB of eMMC storage. However, the device does come with a microSD card slot for further memory expansion.

The Honor Play 20 packs a 13 MP main camera with a 2 MP dual camera setup on the back. There is also a 5 MP sensor in the front for selfies. Other features include a 5,000 mAh battery capacity. It offers support for up to 10 W fast-charging. The handset runs Android 10 straight out of the box with Magic UI 4.0 on top.