Xiaomi earlier announced a new technology concept and new product that will debut tomorrow. The poster is more abstract, with eyeballs as well as visual sense. As of now, there is no real pointer to what this technology could be. However, the poster reads “see the future at a glance”. For now, there are multiple speculations regarding what this device could be. While some users say it is a smartwatch, others say it’s a camera technology, air-to-air charging,  and so on. 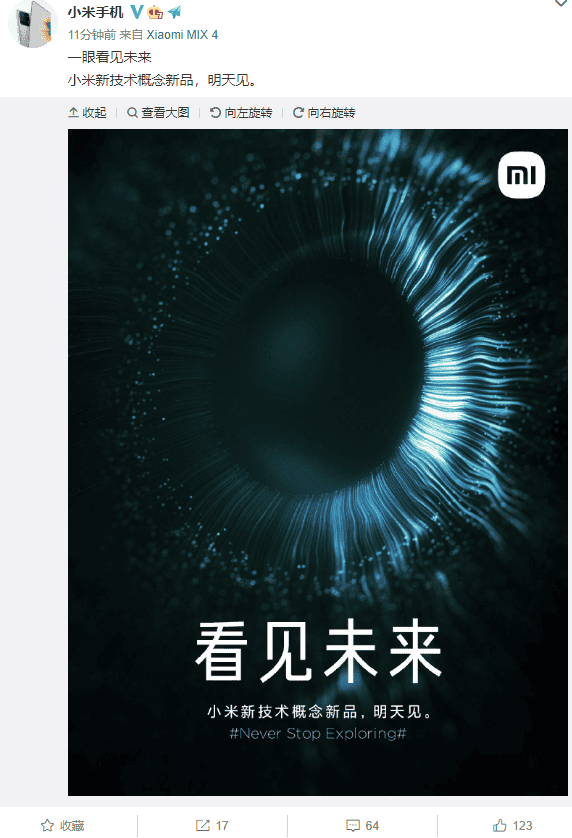 Furthermore, some users believe that this device is a VR product that fits the currently popular concept of “meta-universe”. As of now, all we have are speculations and nothing official. The best thing to do is to wait a few hours for the official launch of the technology.

Considering that this technology has an eye-like design, it could relate to a camera. Recall that Xiaomi is already preparing a 250MP sensor for its future flagships.

Xiaomi to use large pixel camera in future flagships

Samsung’s 200MP ISOCELL HP1 sensor is already official and manufacturers already have the sample. As of now, these manufacturers are already testing this sensor. However, there is no mention of which manufacturer will first use this sensor. Nevertheless, we can easily guess that Xiaomi will be one of the earliest. There are already rumors on the net that the upcoming Xiaomi 12 will impress with a sensor with a record resolution. The well-known network insider Digital Chat Station confirmed this the other day. According to him, the Xiaomi 12 family will offer a model with a dual main camera, where a 200-megapixel module will act as the main one and will be helped by a 50-megapixel ultra-wide. The source also said that Xiaomi will continue to install 108MP and 64MP sensors in its mid-range and high-end smartphones.

Interestingly, the Xiaomi 12 will most likely impress the audience hungry for big numbers, while in the Ultra version they will prefer to rely on rationality, moderation, software, and hardware quality. There are rumors that the Xiaomi 12 Ultra will be soloed by 50-megapixel sensors. Although there are those who claim that a 200-megapixel sensor will set the tone here too. Another feature of the future devices of the Xiaomi 12 series may be super slow motion; with the ability to record video at 1920 frames per second. At this stage, the company is only testing this feature and there is no complete confidence that it will actually be implemented in future flagships.

Next Vivo V1 chip has a magical effect: it can replace a flashlight