Most likely, many of you do not understand why smart glasses are needed. If we are at least accustomed to smart gadgets on the wrist, then we have almost no reason to get smart glasses. The gadget is too specific, not very functional, requires addiction and can bring discomfort, especially to those who wear regular glasses on a regular basis.

However, this does not stop the manufacturers and today Xiaomi presented its concept glasses. In appearance, they look like ordinary glasses, except that the frame itself is more massive and thicker. The chip of the device is “micro LED optical waveguide technology”. The company itself says that smart glasses can be in use for calls, viewing messages, navigating, taking photos and other tasks. 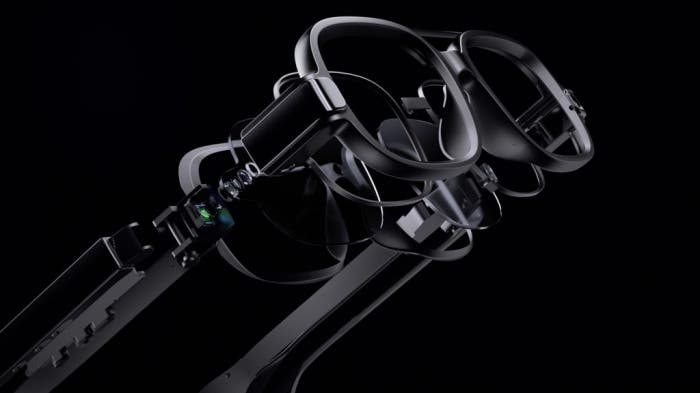 The Xiaomi Smart Glasses hides a tiny 0.13-inch microLED display the size of a grain of rice. The pixel size is only 4 microns and each pixel is individually backlit; to brighten the picture and offer deep blacks. The glasses are based on a 4-core chip and offered the Android operating system.

Xiaomi says it has opted for a monochrome display capable of reaching a maximum brightness of two million nits. Due to the reflection and diffusion of the optical waveguide lens, the human eye can see a much larger image. At the same time, only one lens was in need, while analogues offer complex systems of several lenses and mirrors.

“The refraction process involves bouncing light beams countless times, allowing the human eye to see a complete image, and greatly increasing usability while wearing. All this is done inside a single lens, instead of using complicated multiples lens systems, mirrors, or half mirrors as some other products do,” Xiaomi explains in its blog post.

Interestingly, the company is positioning Xiaomi Smart Glasses as a self-contained and independent product, and not as an additional smartphone display. This is a fairly complex device, consisting of 497 components. The main way to interact with glasses is the XiaoAI voice assistant.

Also, for imaging, a 5-megapixel camera is available on the front of the smart glasses. There is an indicator next to it that lights up, signaling that the camera is active. There is also a microphone that uses its own translation algorithm; to translate in real time and transcribe sound into text.

The glasses themselves are currently only a concept and demonstration of “we can”. We do not know anything yet about their commercial implementation.