Google will officially release the Pixel 6 series in October or November this year. This new series will have two models, Google Pixel 6 and Google Pixel 6 Pro. The Pixel 6 series will be the first Pixel smartphone to use Google’s self-developed Tensor chip. This new processor comes with a 2+2+4 architecture which means that it will have two large cores. This makes the Tensor chip different from other Android flagship processors which use one large core. According to @DSCCRoss, the Google Pixel 6 Pro will use a Samsung E5 LTPO OLED screen. 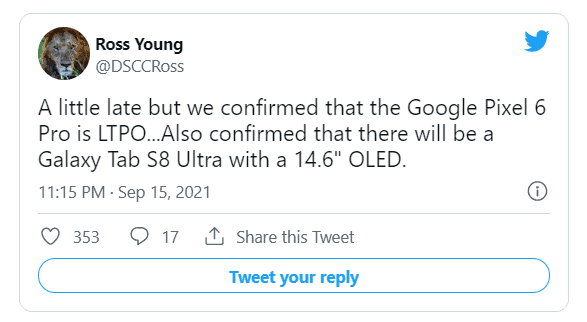 From the reports so far, the Google Pixel 6 Pro will come with a 3120 x 1440 pixel resolution display. This screen will support a 120Hz high refresh rate. This screen will be similar to the Vivo X70 Pro+, with better energy consumption and high peak brightness.

This smartphone will come with a triple rear camera setup which includes a periscope telephoto lens. The main camera will be a 50MP Samsung GN1 sensor. This smartphone will also support up to 12GB of RAM and well as wireless charging. The Google Pixel 6 series is expected to be released on the same day as the official version of Android 12.

Previous Realme Narzo 50 Series Could Launch Next Week, Along With Realme Band 2