Microsoft is giving an audacious step today allowing users to remove passwords from Microsoft accounts. Starting today, the software giant will allow consumers to sign in to Microsoft accounts with its Microsoft Authenticator app, Windows Hello, a security key, or an SMS / email verification code instead of a password.

Worth noting that the new option arrives just months after Microsoft started rolling out passwordless authentication for commercial users in March. It came to help people adjust to the realities of remote work.

“When I think of security, I think you’ve got to protect your whole life,” says Vasu Jakkal, corporate vice president of Microsoft security, compliance & identity, in an interview with The Verge. “It’s no longer enough just to think about work or home and anything in between.”

The new feature comes after many years of work and development. Microsoft has been trying to implement this passwordless world for years, and the pandemic only accelerated things slightly.

Today’s announcement represents a big change and steps for Microsoft. It comes nearly three after the company’s launch of security keys in 2018. The company also made Windows 10 passwordless in 2019, hinting at this passwordless future. According to Jakkal, they have been rolling out this feature at Microsoft. As a result, now, nearly 100 percent of Microsoft is passwordless. More than 200 million people are already using password-less options. The executive expects users to widely adopt the feature due to the convenience it brings. 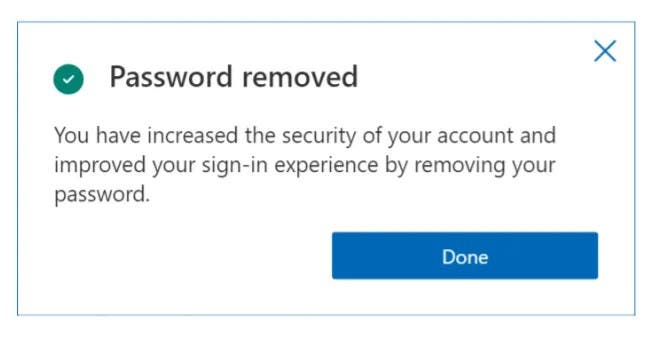 Worth noting that removing your password is quite a simple process. Users will just need to have the Microsoft Authenticator mobile app installed and linked to their personal Microsoft account. Once that’s complete, they can visit accout.microsoft.com and select advanced security options to enable passwordless accounts in the additional security section. Users can then approve the change straight from the Authenticator app. After this small process, they will be completely free from “password ties”. Of course, the change is not permanent. If you’re feeling the need to return to the password, you can reverse the chance and add a password back to your Microsoft account.

This feature comes just a month ahead of Windows 11 official debut. We believe that the new OS will be a catalyst for the new change.