Google is gearing up to unveil its Pixel 6 series smartphones and it will be one of the company’s biggest announcements in recent years. First of all, the company is bringing back the Pro variant with the Pixel 6 Pro. The new smartphones will come with a unique and very interesting design. Moreover, they will come with a exclusive Tensor chip that is developed by Google and will give it the company fully control to the hardware part of the handsets. The new devices may be the best alternatives for iOS users who are tired of iPhones, and may also be a valid choice for those supporting Pixel smartphones and wanting the best Android experience in the market.

We have grown used to see Pixel smartphones being launched in October. Therefore, isn’t a big surprise to see the new Pixel 6 and Pixel 6 Pro being revealed in the next month. However, during the past few days, reports have emerged with the exact launch date for the new flagship contenders. A couple of weeks ago Google shared an image picturing multiple Pixel 6 smartphones where they were showing the date “Tuesday 19” as in October 19. Today, a new report corroborates with that launch date. 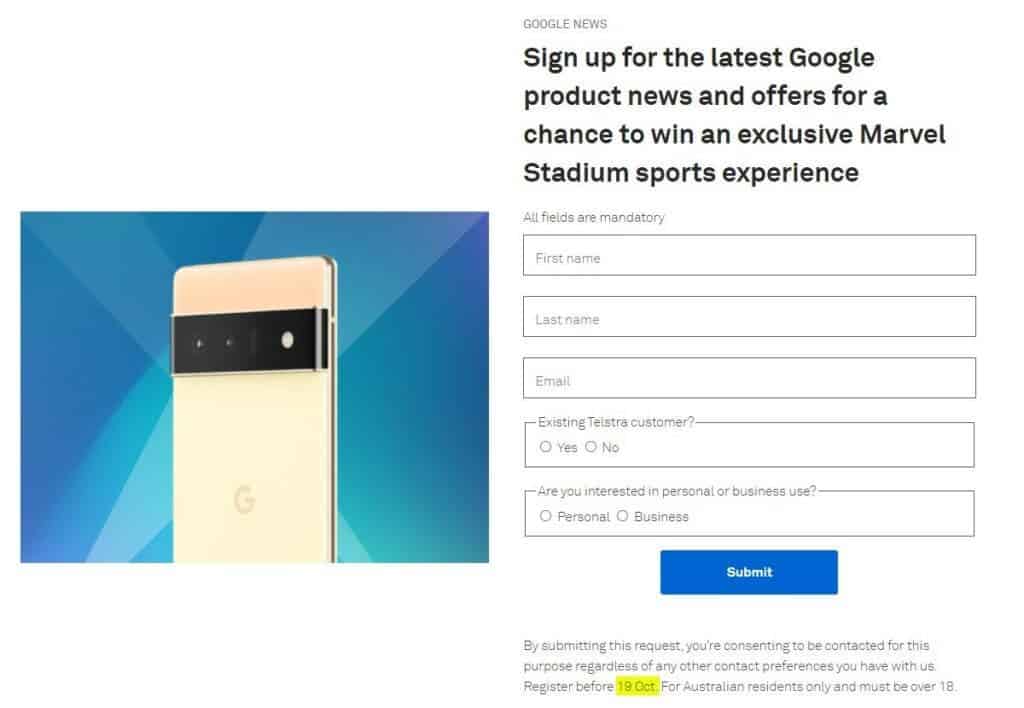 The new info comes straight from an ad from Australian carrier Telstra, which is running on Facebook. It says “All-new Google Pixel 6 coming soon” and asks users to register interest in launch for a chance to win a Marvel Stadium sports experience. This offer ends on October 19, and we assume that this is not a mere coincidence.

The campaign also brings new details about the Pixel 6 series availability. Apparently, the new smartphones will be available in only a few countries and Australia seems to be among them. It’s not a surprise to see Google focusing in just a set of limited countries. It’s a pity to see Google sticking with this strategy for another year.

In related news, the Pixel 6 series has passed through the FCC certification. It revealed that 3 out of the 6 SKUs have mmWave 5G support. Furthermore, only 3 out of the 6 SKUS support UWB (Ultra Wideband), but the overlap isn’t 100%. Furthermore, all the six will come with Wi-Fi 6E. We assume that the mmWave division is a measure to save money between the regional variants. After all, few countries have active mmWave networks.

The Pixel 6 and 6 Pro will run Android 12 straight out of the box. The new operating system may reach older devices a bit sooner on October 5. Besides the new smartphones, rumors suggest that the company is also preparing a foldable Pixel, but it’s unclear if it will be ready for the next month.