There have been reports and speculations that the European Commission is proposing a unified charger for smartphones in the region. However, it is no longer speculation as the European Commission formally submitted a proposal to unify the charging ports of consumer electronic products. These products include smartphones, tablets, and others. Interestingly, the proposed unified charging port is the USB Type-C port which most Android smartphones already use. Obviously, this move will have a significant impact on Apple. 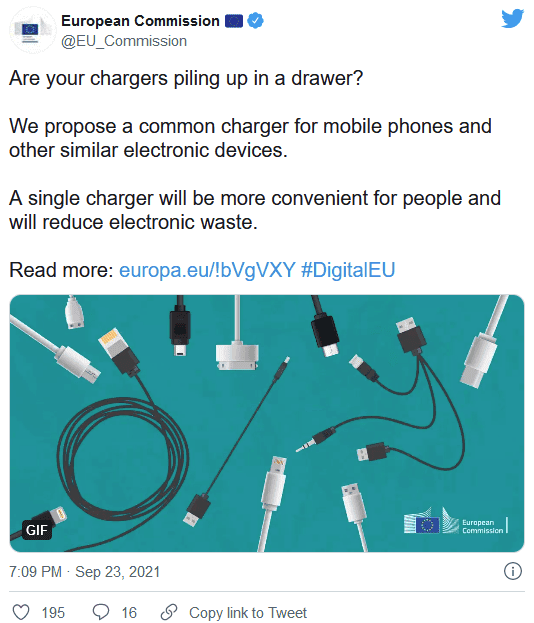 A unified charger will save money – EU

In fact, the EU’s initiative has been brewing for more than 10 years, but it has not formally submitted the bill until today. The European Commission stated that this move is not only beneficial to the environment but also saves users about 250 million euros (approximately $293 million) each year.

According to the proposal of the European Commission, the USB Type-C will become the standard interface for all smartphones, tablets, cameras, earphones, portable speakers, and handheld video game consoles. In addition, chargers will also sell separately from electronic devices.

“European consumers have been frustrated by the accumulation of incompatible chargers in their drawers for a long time,” Margrethe Vestager, the European Commission’s competition commissioner, said in a statement. “We have given the industry enough time to come up with their own solutions, and now, the time is ripe to take legislative action for the universal charger. This will be an important victory for our consumers and the environment, and is also in line with our green and digital ambitions”.

Thierry Breton, the commissioner in charge of the internal market also had his say. He claims that the proposal was to “end” unnecessary and irreplaceable chargers. “Through our proposal, European consumers will be able to use a single charger for all their portable electronic products. This is an important step to improve convenience and reduce waste.”

Considering the size of the European market, Apple was quick to respond to the new bill. The company expresses its concern regarding the proposal. According to Apple, such strict laws will stifle innovation, rather than encourage innovation. Apple claims that this will harm consumers in Europe and around the world.

However, Apple has quietly made adjustments before, and magnetic wireless charging is a good way. There are reports that Apple is already preparing a portless version of the iPhone. In this device, charging will be entirely wireless.

In 2019, the well-known Apple analyst, Kuo Ming-Chi also said that Apple may release a completely wireless iPhone in 2021. This is likely to mean that Apple will completely abandon the Lightning port and skip the Type-C port. There is a high probability that the device will completely rely on wireless charging. However, 2021 is almost ending and this device will most likely not arrive this year.

Next Microsoft Surface Duo 2 will get three years of updates