Apple unveiled the iPhone 13 series in the last week with neat improvements in the display, camera, and performance departments. However, reports quickly emerged stating that Apple has also take care of the battery inside the newer iPhones. The company has increased the size of the cells inside the four iPhone 13 models. Some of them got bigger upgrades, while others were just incremental upgrades. Today, a teardown video has revealed that the recently released iPhone 13 Pro comes with a battery that has 3,095 mAh in size.

We assume that if you’re used to the current industry of Android smartphones, this is anything but a good battery capacity. However, we need to recall that the iPhone 12 Pro had a battery capacity of just 2,815 mAh battery. Apple certainly lives in a parallel world when it comes to the battery size of its smartphones, perhaps the only device to rival Android standards is the Apple iPhone 13 Pro Max. However, it’s good to see the regular Pro model getting an upgrade. After all, this may be a determining factor for some users to upgrade. 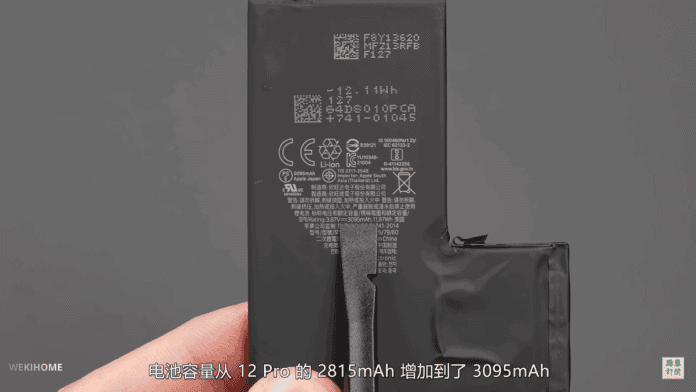 Apple had promised that the new model should last up to 1.5 hours longer on a single charger, so it figures. The battery is L-shaped this time and is manufactured by the Chinese Sunwoda Electronic Co. The teardown video comes from blogger WekiHome and further reveals details about the 13 Pro 5G modem. The new device is coming with a Qualcomm X60 modem for 5G connectivity. In addition, Samsung is the one behind the 120 Hz screen and has a slightly smaller Taptic Engine compared to last year. 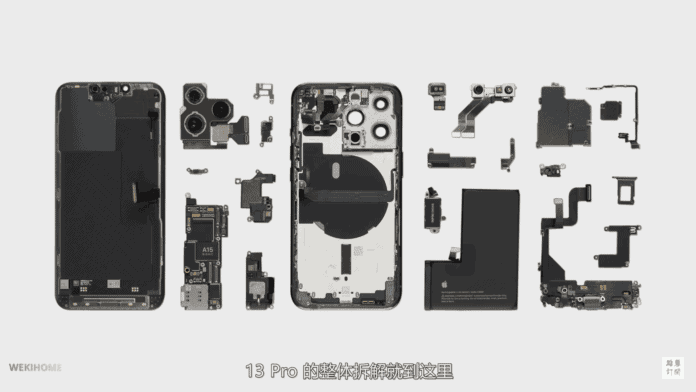 The video also reveals that Samsung is behind the RAM module. The flash storage memory storage is something for Japan’s Kioxia. Internally, the iPhone 13 Pro resembles the 12 Pro but brings some good refinements.

The new device will still be good for those who seek an upgrade in Apple’s smartphone territory. The iPhone 13 Pro and Pro Max are the only ones coming with 120 Hz displays. Moreover, they come with improved cameras. Under the hood, they come with the latest Apple A15 Bionic. However, this chip is the same for all variants. Unfortunately, users that want to purchase an iPhone 13 Pro and Pro Max will have to wait a long time to receive the device. These devices’ delivery time has been delayed to October, with the iPhone 13 Pro Max hitting October 23.