A few days ago, Apple officially commenced sales of the iPhone 13 series. As usual, there was a long queue in Apple stores in different parts of the world, especially in the US and China. Of course, there were early purchasers who re-sold the new iPhones at a higher price. However, some users are now reporting that the iPhone 13 has a bug. Users complain that they can’t use Apple music on the iPhone 13. There are also complaints relating to backup and recovery. 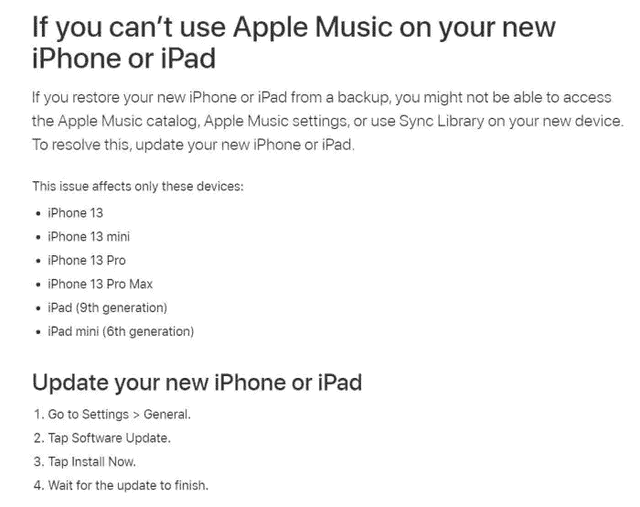 According to an official statement from Apple, there is a bug relating to the backup and recovery as well as a macro mode switch bug. According to reports, after recovering data on the iPhone 13 from the backup, it may cause the widgets to reset to the default state. This also affects Apple Music, resulting in the inability to access the catalog, settings, or use the synchronization library. The devices that may have this problem include iPhone 13/Pro series, iPad 9, and iPad mini 6.

The macro mode switch bug is such that once the macro imaging mode is on, it will not turn off. There are also reports regarding the inability of the iPhone 13 series to communicate with the Apple Watch. Apple customer service recommends that users reset the smartphone to solve this issue. However, this did not work for all users.

However, with regards to the bugs on the iPhone 13, some fans do not see any problem. These are obviously Apple fanboys that love anything “Apple”. According to some users, once a new iPhone series hit the market, there are usually some bugs. These users are optimistic that Apple will fix all these bugs in no time.

As Apple’s strongest iPhone so far, the iPhone 13 series comes with a new generation of A15 Bionic chips. This processor uses a 5nm manufacturing process and integrates 15 billion transistors. However, the entire iPhone 13 series does not use the same chip design. Among them, the iPhone 13 and iPhone 13 mini use a 4-core GPU. According to Apple, this increases the performance by 30%. On the iPhone13 Pro and iPhone13 Pro Max, the Bionic A15 chip has an extra GPU core. The 5-core GPU makes the image processing performance of the phone increase by up to 50%.

Considering that the iPhone 13 series is only a few days old, we can not consider these bugs as a problem. As expected, the company already has an update for these issues. You may need to update your device if you notice this issue.