The Honor brand, we recall, was forced to secede from the telecommunications giant Huawei due to tough sanctions from the United States. Since then, the Honor brand has stepped up its research and development activities and announced a number of products that have gained popularity among consumers. 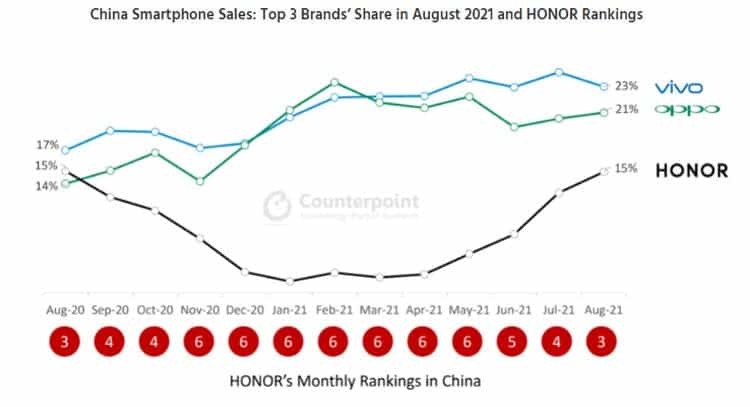 Commenting on Honor’s gains in China, Research Director Tarun Pathak said, “After being spun off from Huawei, Honor was able to restore ties with component players. Since then, leveraging its strong R&D capabilities, Honor has launched new products and has been on a rapid recovery path in China. The Honor 50 series has been an instant success in the mid-segment. Honor is also targeting the premium segment with the Magic series, thus expanding its portfolio across price bands. There was also a pent-up demand from the loyal Huawei and Honor consumers who held on to their devices and did not switch to other brands. Its strong relationships with distributors also helped Honor relaunch products on a large scale. Honor’s resurrection will further intensify competition in the Chinese market in H2 2021.”

The competitive landscape in China has also been changing over the last year. Commenting on this and Honor’s expansion, Senior Analyst Varun Mishrasaid; “Over the last year, there has been a reshuffle in the Chinese market. OPPO, vivo and Xiaomi all have aggressively expanded their presence in China in terms of products, market share and distribution. Apple with its iPhone 13 launch also has a significant opportunity to capture Huawei’s premium segment. Therefore, the competition is likely to intensify further in H2 2021.

Honor will be expanding its portfolio further across price segments and geographies. However, market share growth outside China is likely to be gradual; as loyalty in the mid-segment remains low and Honor will also have to rebuild its distribution network. Then, there are also intensifying component shortages which can likely hinder Honor’s expansion in 2021. Besides smartphones, Honor is also expanding into devices like laptops, tablets, and wearables under its 1+8+N strategy; which aims to drive growth in segments beyond smartphones.”

Next Google is the most popular search query on Bing