Amazfit GTR 3, GTR 3 Pro, GTS 3 official-looking renders have surfaced online, alongside their key specifications. The popular Chinese smart wearable brand is on the verge of unveiling three new wearable devices later this month. Last month, a report suggested that Amazfit will be unveiling its next GTR series smartwatches in its home country on October 12. Aside from that, the GTS 3 is likely to make its debut at the impending launch event. 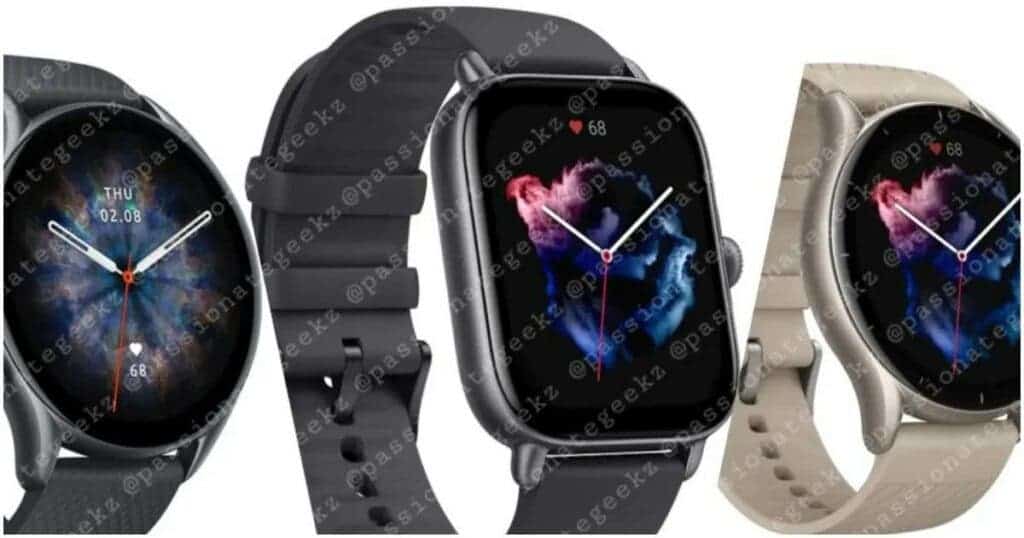 In other words, Amazfit will take the wraps off three new smartwatches including the Amazfit GTR 3, GTR 3 Pro, and GTS 3 during the October 12 event. However, the aforesaid smartwatches are likely to be announced globally on October 11. Ahead of the launch event, these three smartwatches have made their appearance online in the form of renders. Moreover, some of their key specifications have been revealed by PassionateGeekz.

The Amazfit GTR 3 smartwatch could sport a 1.39-inch AMOLED display, and the GTR 3 is likely to support a whopping 150 Sports mode. In fact, the report suggests that all three models will come in an aluminum alloy body with 150 sports modes support, and Bluetooth 5.1 connectivity. Morever, the smartwatches will offer a myriad of other useful features. This includes Music storage, Bluetooth calls, Speaker, SpO2, Swimming Pulse Measurement, Respiratory Rate Measurement, Biometric sensors, Sports Modes, and Breathing Exercises.

Furthermore, the GTR 3 model will offer 454 x 454 pixels resolution, and it will draw its juices from a 450mAh battery. This robust battery will offer a battery life of up to 24 days. As far as features are concerned, the smartwatch will boast the same features as its predecessor. It will be available in moonlight gray and thunder black color options. One of the notable addition this time around is the brand’s own proprietary software, ZEPP OS. The software will be offering a considerably faster and responsive interface as compared to what it delivered in earlier models.

Now, the animated watch faces will run at 60FPS. The GTR 3 Pro adopts a similar design to the GTR 2 Classic and Sports models. However, unlike its precursor that sports a 1.39-inch display, the GTR 3 Pro features a larger 1.45 inches display. On top of that, it delivers an improved 70.59 percent screen-to-body ratio. Moreover, it comes with narrower bezels that measure just 3.5mm. It offers a pixel density of 331PPI. Regrettably, details about the GTS 3 are still scarce at the moment.

However, the GTS 3 is likely to sport a 1.75-inch display and go on sale in three color options. This includes graphite black, ivory white and tera rose color options. As far pricing is concerned, the GTS 3 could retail for around $205. The GTR 3, on the other hand, is likely to carry a price tag of about $215. The GTR 3 Pro could set you back $225.

Next OnePlus 9RT Specifications Confirmed Ahead Of Launch