Realme GT Neo2T smartphone’s launch date has been confirmed, and more shreds of information about the upcoming handset have surfaced online. Last month, Realme took the wraps off its Realme GT Neo2 smartphone in China. Now, the company is gearing up to extend the GT Neo2 series by introducing a new model this month. The popular Chinese smartphone manufacturer has confirmed that the Realme GT Neo2T will be hitting the store shelves soon.

The Realme GT Neo 2T has been subject to multiple speculations. The handset has already passed through the TENAA certification website, revealing some of its key specifications. According to an earlier report, Realme has been planning to launch the Realme GT Neo2T this month as the latest entrant in its well-received 2021 GT series smartphones. Now, the company has not only confirmed the phone’s existence but also revealed its launch details.

The Realme GT Neo2T will be unveiled on October 19 at 2 PM (local time) in the company’s home country of China. As mentioned earlier, the phone’s TENAA listing has already divulged its specifications. Realme has shared a poster that shows the retail package of the Realme GT Neo2T smartphone. However, the company is still mum on the phone’s key features. The word on the street is that the Realme phone with model number RMX3357 that appeared on TENAA in August will make its debut carrying the GT Neo2T moniker. 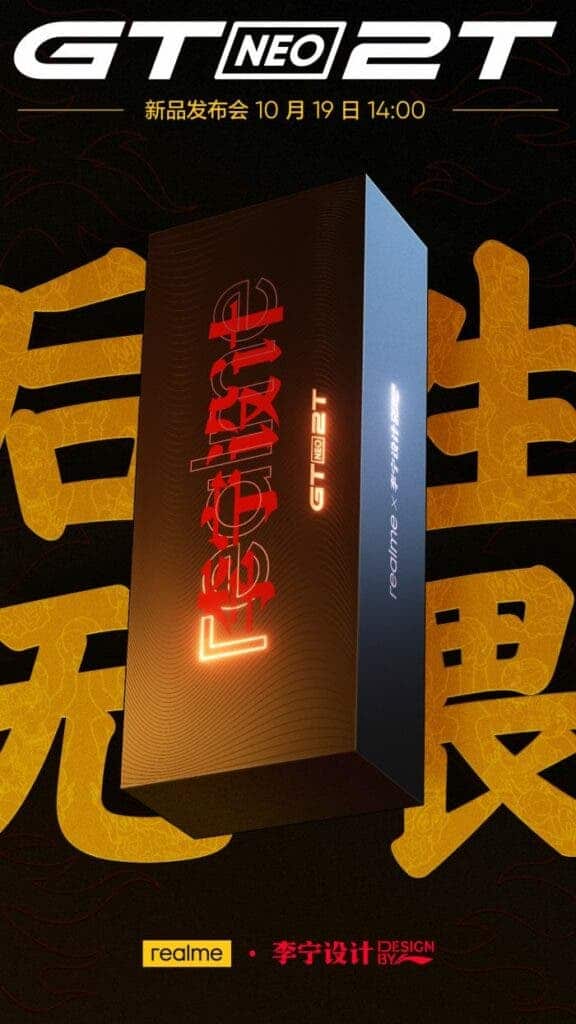 The GT Neo2T adopts an eye-catching design, which has been created in collaboration with China’s popular sportswear company, Li-Ning. Furthermore, the company is touting the handset with the slogan “Fearless afterlife!,” according to a report from MyFixGuide. The warm-up post showcases the retail box of the smartphone. It is worth noting that Realme has featured the same model in the launch announcement. 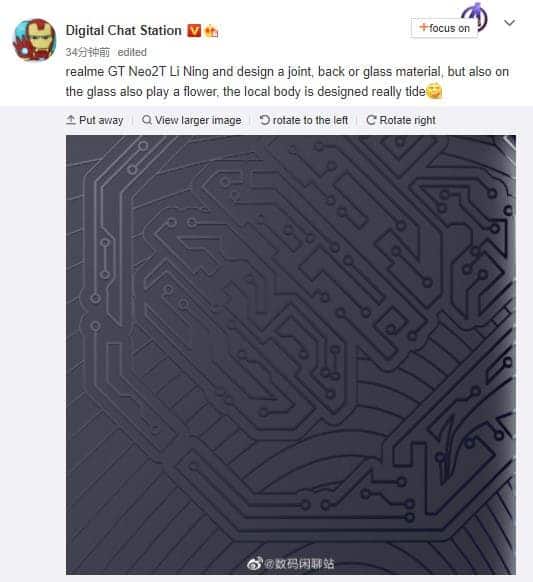 Aside from that, the leaker suggests that the glass panel features flowers. The overall design, according to the tipster, resembles a circuit board. The impending smartphone is likely to sport a 6.43-inch AMOLED display that delivers a Full HD+ resolution. Furthermore, the phone could offer a 120Hz refresh rate. There’s a punch-hole on the display to house the 16MP front shooter. Moreover, the phone house three rear-mounted cameras. This includes a 64MP main camera, an 8MP, and a 2MP punch-hole.

The phone is likely to draw its juices from a 4,500mAh battery with 65W rapid charging support. The phone will probably ship with 8GB or 12GB of RAM and offer 128GB or 256GB of onboard storage capacity. Aside from that, it could come running Android 11 with Realme UI 3.0 on top. Realme is also planning to unveil the Realme Q3s smartphone this month, featuring a 144Hz LCD panel, a 5,000mAh battery, and a Snapdragon 778G chipset.