Strategy Analytics has seen a surge in shipments of Arm-based notebook processors. Moreover, the industry is rapidly expanding both in monetary and piece terms.

In the past year, it is estimated that shipments of Arm chips for laptops in monetary terms increased nine times compared to 2019. This year, as experts predict, the industry will show more than threefold growth: as a result, its volume will reach $ 949 million.

Apple has the lion’s share of the market with its M1 processors. Analysts believe that in 2021, Apple empire will receive 79% of the total revenue in this segment.

In second place will be MediaTek with a score of 18%. “Bronze” will go to Qualcomm, which by the end of this year will be able to count on only 3% of the world market.

As for the shipments of Arm chips for notebooks in piece terms, they, according to analysts, will more than double this year. As a result, such processors will occupy over 10% of the total supply of chips for laptop computers. 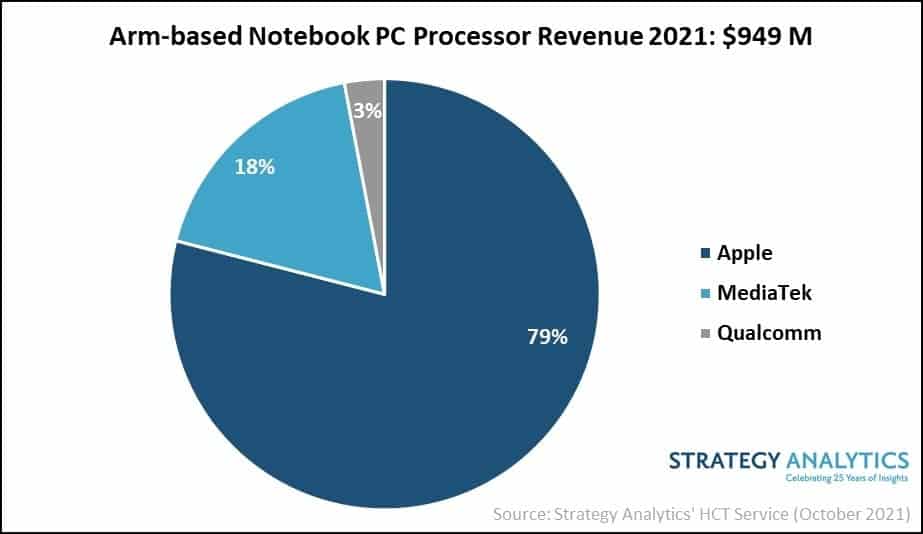 Sravan Kundojjala, author of the report and Associate Director of Handset Component Technologies service at Strategy Analytics; commented, ” Apple and MediaTek seized the initiative in the Arm-based notebook PC processor market. Apple will capture almost 80 percent revenue share in 2021, driven by its Apple Silicon M1. MediaTek, on the other hand, will rank number two, thanks to its early leadership in the Arm-based Chromebook PC processor market.”

Mr. Kundojjala, continued, “Qualcomm, despite its close partnership with Microsoft on Windows OS, couldn’t make a dent in the notebook PC market so far. Qualcomm is investing heavily in the computing market with its Nuvia acquisition, and we will see results only in 2023. In the near term, Qualcomm can focus on Chromebooks to capture share from MediaTek. Strategy Analytics believes that Arm-based notebook PC processor vendors will need to step up software investment and branding efforts to compete effectively with x86-based vendors Intel and AMD.”

Analysts said Apple will host several new product launches this fall. In mid-September, the company released the flagship iPhone 13 smartphones, updated the base iPad and iPad mini, and introduced the third-generation Watch. Now Apple has announced another event to take place on October 18th.

At the October event, Apple is expected to unveil a number of new computers based on its next-generation proprietary processors. The company is expected to announce 14- and 16-inch MacBook Pros next Monday. In addition, early leaks have hinted at the launch of an advanced version of the Mac mini and a compact Mac Pro with a 40-core Arm chipset. It’s also worth noting that the third-generation AirPods have not yet been introduced; although many sources have said they will hit the market this year. This means that their launch could also take place during the event on October 18th.

Next Key details about the upcoming Vivo X80 have been revealed