HMD Global is gearing up to introduce its very first Nokia 5G smartphone in India. It’s the Nokia XR20, which arrive this year as one of the most durable devices from the brand with 5G connectivity. The Nokia XR20 is a rugged 5G smartphone that can be used in various environments. The new rugged smartphone will come with a promise of four years of updates. The handset has MIL-STD810H certification which ensures it can withstand drops from up to 1.8 meters. The phone comes with Gorilla Glass Victus on the front, alongside IP68 dust and water resistance. Nokia fans have so far announced it on Twitter. The pre-booking for the device will start from October 20 which points out to a launch by the end of October.

The Nokia XR20 packs a 6.67-inch Full HD+ IPS LCD with a peak brightness of 550 nits. There is a punch-hole camera on the front. Under the hood, the handset comes with Qualcomm’s Snapdragon 480 processor. It also has 6 GB of RAM and 128 GB of Internal Storage. There’s a micro SD card slot if you need to expand the memory.

In terms of optics, the device has a dual-camera setup on the back. You may find this strange since nowadays it’s three or four cameras for most smartphones. However, Nokia has been courageous to keep just two useful sensors rather than putting low-resolution macro or “Ai” cameras just for the numbers. We have a 48 MP primary camera and a 13 MP ultrawide snapper. There is also a dual-LED flash on the back. Selfies and Video calls are ensured by an 8 MP camera. 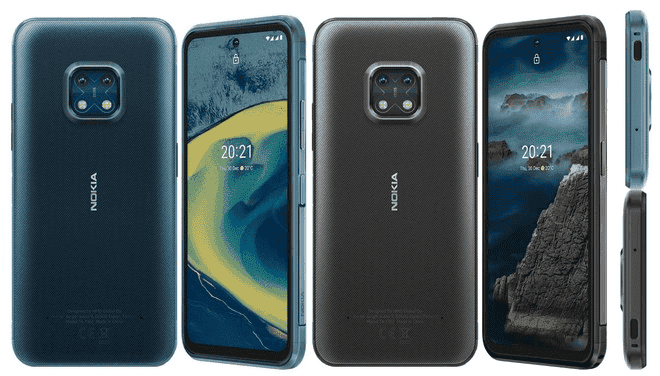 As mentioned before, the Nokia XR20 is a rugged device. So it comes with the MIL-STD810H certification. Moreover, it provides IP68 certification against dust and water. It’s a device for extreme circumstances and 5G comes as a plus.

The Nokia XR20 draws its powers from a 4,630 mAh battery with 18 W fast charging. It runs Android 11 straight out of the box and it’s a vanilla experience. The phone comes with 15W wireless charging which is a plus. In terms of connectivity there is dual-SIM, Wi-Fi 6, Bluetooth 5.0, GPS, micro SD card slot, a USB Type C port, and a 3.5 mm headphone jack.

The phone is available in Europe since July. In the old continent, the device sells for €499. In direct conversion, that means that the phone’s price in India would be around INR 43,500. However, we’ll have to wait and see which pricing strategy the company will use for the country. Companies are usually more aggressive in India.