Yesterday, Lu Weibing, president of Xiaomi Group China and general manager of the Redmi brand, posted on Weibo with a new smartphone. This device is not official as of now. According to him, “the new mobile phone is very cool to use”. Lu Weibing used this new smartphone to post a review of the classic Redmi Note 7. Recall that the Redmi Note 7 sales exceed one million units within the first month. Considering Lu Weibing’s post with an unreleased Redmi smartphone, there are speculations that the Redmi Note 11 will launch soon. 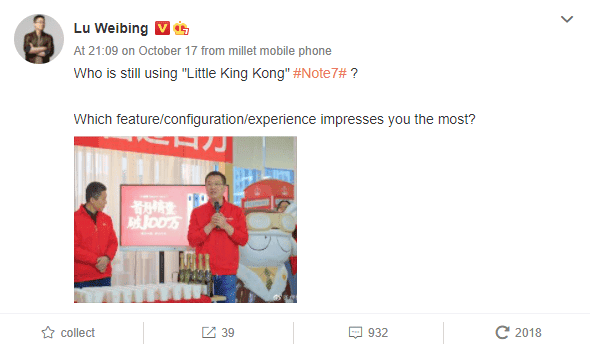 Unfortunately, there is no official information regarding this upcoming Redmi smartphone. In fact, we can not be certain that the smartphone that Lu Weibing is currently using is the Redmi Note 11. According to previous reports from @DCS, the high-end version of the upcoming Redmi Note series supports 120W fast charging. It seems that Redmi Note 11 Pro will support 120W flash charging.

At present, 120W fast charging is only supported by high-end flagships, such as Xiaomi Mi MIX 4, Xiaomi Mi 10 Ultra, etc. This time, Redmi will release the 120W fast charging for a thousand yuan ($155 – $310) Redmi Note series. This will make this smartphone very competitive.

It is worth noting that Wang Teng, product director of Xiaomi’s Redmi, hinted that Redmi will soon hold a new product launch conference. Of course, we expect that this upcoming Redmi smartphone will debut at this event.

Unfortunately, the release time of the new Redmi Note series is still uncertain. Whether or not this series will launch this year remains to be seen. However, we will keep our fingers crossed and see what this Redmi flagship will eventually offer.