Honor X30 Max has been spotted on Geekbench with key specifications ahead of its official unveiling. Multiple reports suggest that Honor is currently working on a new smartphone dubbed, the Honor X30 Max. Moreover, the handset’s most notable will be its mammoth 7.09-inch display. While nothing is set in stone yet, the purported handset has made another appearance online in the form of a Geekbench listing. As expected, the listing divulges some key specifications of the handset.

Despite the lack of an official confirmation, the rumor mill has been churning out all sorts of speculations surrounding the X30 Max smartphone. Aside from that, the device has been subject to a slew of leaks. As a result, vital shreds of information about the upcoming smartphone are already making the rounds online. Now, 91mobiles has spotted the Honor X30 Max on the Geekbench database. Aside from revealing some key details about the smartphone, the Geekbench listing hints at the phone’s imminent launch.

As mentioned, the Geekbench listing has revealed what the X30 Max has in store for the consumers. The phone carries the model number Honor KKG-AN70, as seen in the Geekbench database image below. In the single-core test, the alleged Honor X30 Max scored 721. Moreover, it socred 2,129 in the multi-core test. Furthermore, the Geekbench listing reveals that the Honor X30 Max will pack an octa-core MediaTek Dimensity 900 5G SoC under the hood. Aside from that, it hints at 6GB of RAM in terms of memory. 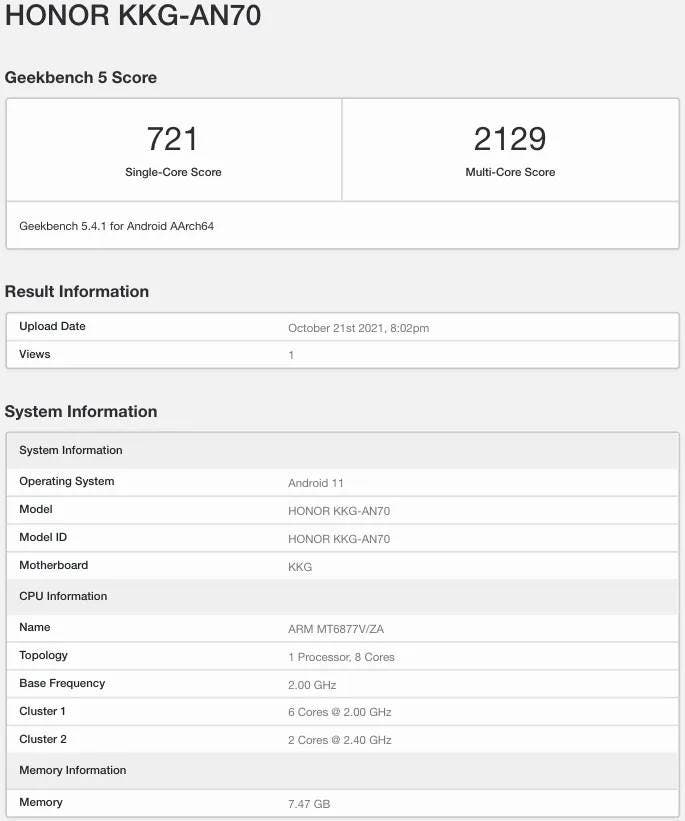 However, the Honor X30 Max is likely to ship with more RAM variants. Also, the Geekbench listing suggests that the phone will run Android 11 OS out of the box. Regrettably, this is pretty much everything we know based on the phone’s Geekbench listing. Nevertheless, earlier leaks have already shed light on most of the phone’s specifications and features.

In a now-deleted Weibo post, leaker Digital Chat Station had revealed the specifications of the Honor X30 Max smartphone. The image shared by the tipster showed a 7.09-inch display that delivers an FHD+ (2280 x 1080 pixels) resolution. Moreover, the screen seems to feature a dewdrop notch that will probably house the front shooter. Aside from that, the display delivers a screen-to-body ratio of 90 percent. Furthermore, the panel will reportedly have a DCI-P3 color gamut and an RGBW pixel arrangement. 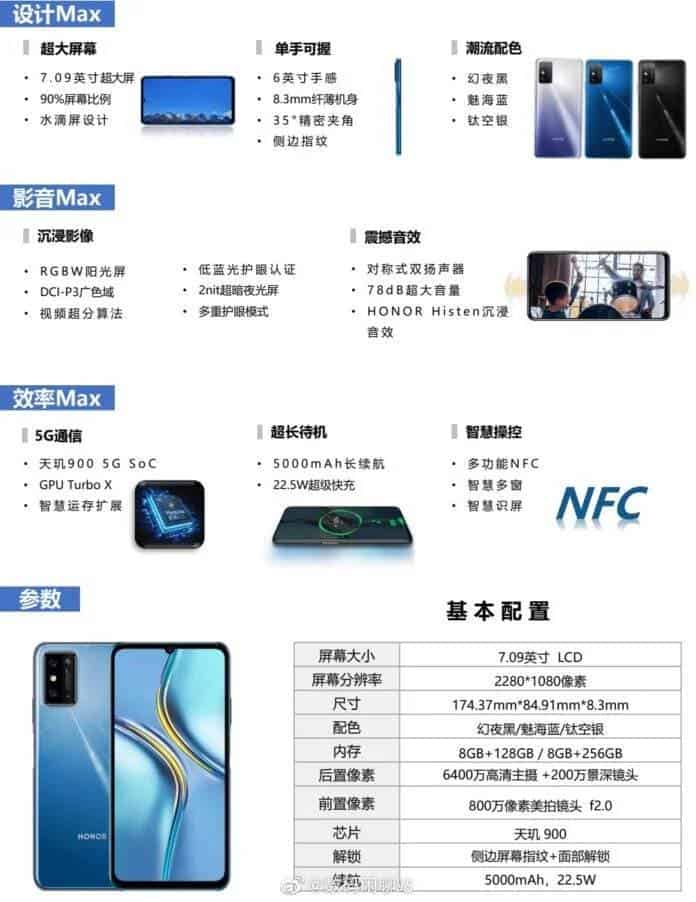 The screen offers brightness as low as 2 nits. On top of that, the display is low blue light emission certified. It also boasts a wide range of multiple eye protection modes along with a video algorithm. Aside from that, the phone houses HONOR Histen Sound-powered dual stereo speakers, that are said to sound 78dB loud in full volume. The phone will also support GPU Turbo X and even virtual RAM. Moreover, its optics department will be quite impressive.

The Honor X30 Max will house a 64MP wide camera, and a 2MP depth camera. This dual-camera rear-mounted setup will be vertically aligned. Upfront, the phone will feature an 8MP shooter for selfies and video calling. The phone’s dimensions are 174.37 x 84.91 x 8.3mm, and it will be available in Titanium Silver, Charm Sea Blue, and Magical Night Black. The word on the street is that the phone will launch in November before China’s Double Eleven (Singles’ Day) shopping festival.

Next 2022 Apple MacBook Air Specifications Tipped, Could Launch In Mid 2022