Over the past few days, there have been several official reports regarding the upcoming Redmi Note 11 series. However, the company has been holding back information about the processor of this device. However, the Redmi Note 11 Pro recently appeared on GeekBench and this listing reveals that this smartphone will use the Dimensity 920 SoC. In addition, Lu Weibing, president of Xiaomi Group China and general manager of the Redmi brand, has now officially confirmed the chip. According to him, the Redmi Note 11 series will be the world’s first MediaTek Dimensity 920 device. 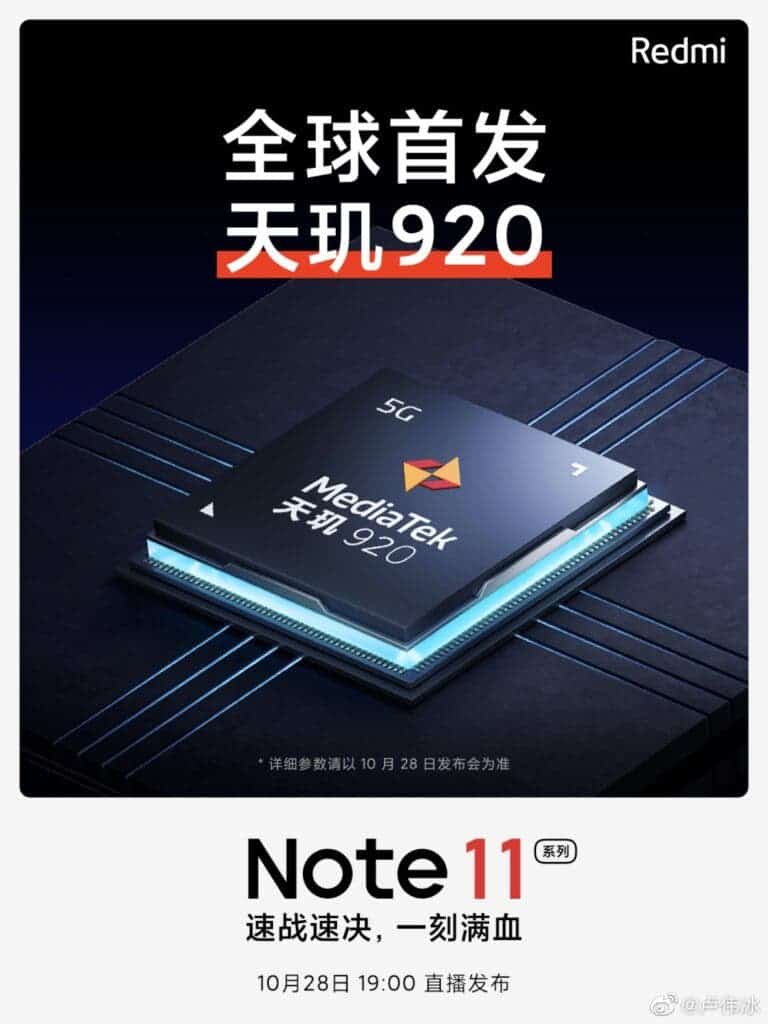 Redmi claims that the Note 11 series achieves the ultimate balance of power consumption and battery life under the premise of ensuring performance so that the daily experience is more stable. Lu Weibing emphasized that MediaTek Dimensity 920 uses an advanced process-TSMC 6nm, which is the same process as the flagship core. Furthermore, this chip uses the latest A78 dual large cores to achieve an excellent balance of performance and power consumption.

Dimensity 920 octa-core CPU includes ARM Cortex-A78 cores with a main frequency of 2.5GHz. This chip also supports LPDDR5 RAM and UFS 3.1 flash memory. This improves its gaming performance by 9% relative to the Dimensity 900. Furthermore, this chip supports smart display technology and hardware-level 4K HDR video shooting function. There are speculations that the Redmi Note 11 will use a Dimensity 810 chip while the Redmi Note 11 Pro/Pro+ comes with the new Dimensity 920.

The Xiaomi models listed on Geekbench are 21091116C and 21091116UC. The former is codenamed Pissarro, while the latter is called pissarropro. These devices are most likely Redmi Note 11 Pro models. The Pissarro variant with the model number 21091116C has 8GB of RAM and is equipped with the MediaTek MT6877T chipset. The chip clocks at 2.5GHz and comes with the Mali-G68 GPU. The promotional name of this chipset is Dimensity 920 and it also comes with 5G support. On Geekbench 4 single-core test, it scores 3607 while the multi-core score is 9255. The device is pre-installed with the Android 11 system.