It is not a surprise that more information regarding the Redmi Note 11 series is hitting the web. We have moved past the speculation stage for this series. Now, the company is officially confirming the specs of this new series. In all honesty, the Redmi Note 11 series is a flagship series in all areas apart from maybe the processor. As of now, there is no official information on the chip that these smartphones will use. However, the latest official information is on the camera, the main camera. According to earlier reports, the Redmi Note 11 Pro and the Pro+ models will come with a 108MP main camera. This gives the impression that the standard model will use a different main sensor. 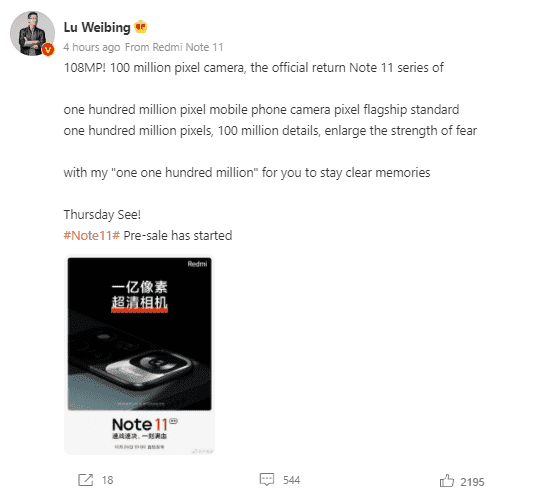 However, a recent Weibo post from Redmi’s general manager, Lu Weibing, shows that the 108MP camera will be a standard for the Note 11 series. This means that all the smartphones in the series will use this sensor. The Redmi Note 11 series 108MP main camera has three characteristics which include high pixels, better dark light, and crispiness. This sensor delivers a resolution of up to 12000 x 9000, 9-in-1 technology, a single-pixel as large as 2.1μm, and more light. With the dual ISO technology, the night scenes shot are purer and have less noise. 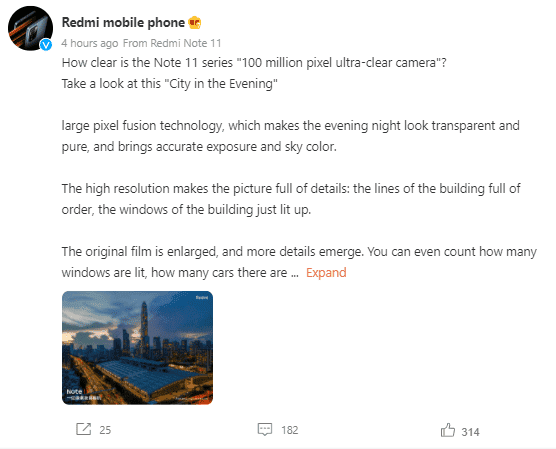 Furthermore, Redmi released a sample of the Note 11 series main camera shot. The company calls this image “Evening in the City”. Through the large pixel fusion technology, the night appears transparent and pure. This brings accurate exposure and sky color, and the high resolution makes the picture full of details. You can clearly see the building lines and the lit windows of the buildings. In addition, the original film is enlarged and it shows more details. Redmi claims that you can even count how many windows are lit and how many vehicles are speeding on the road.

A few days to launch

The Redmi Note 11 series will officially arrive on October 28th in China. At present, except for the processor parameters, most of the other key parameters are in the public domain. The Note 11 series will come with an AMOLED display and it will support a 120Hz high refresh rate. This device will also support a 360Hz touch sampling rate and the screen uses a center punch-hole design.

Furthermore, this series will use a side-fingerprint sensor, a triple rear camera, and a symmetrical speaker tuned by JBL. In addition, it will retain the 3.5mm headphone jack. It is worth mentioning that the Redmi Note 11 series is also currently one of the few models that support 120W fast charging. To keep its lights on, there will be a built-in 4500 mAh high-capacity battery.

Previous A Realme Air Conditioner Could Be In The Works, Features Tipped