Xiaomi’s POCO unveiled the POCO M3 Pro 5G earlier this year as its very first 5G handset for the mid-range segment. The device was a rebadged Redmi Note 10 5G in a different body. Its camera with the Dimensity 700 SoC and has some neat specifications and an attractive price. The device went official just a few months ago, but the company seems to be already preparing the terrain for a successor. According to recent rumors, the brand is preparing the terrain for a POCO M4  Pro 5G. The exact launch date of the device is yet to be revealed, but the device already passed through multiple specifications. Today, it paid a visit to Geekbench benchmark, and the specs are slightly disappointing

POCO M4 Pro 5G is expected to go official between November and December. The device’s Chinese variant passed by the Geekbench website revealing key specs in the process. The device carries the 21091116AC model number which is associated with the Chinese version. The global variant, on the other hand, has a 21091116AG model number. Anyway, the former passed by Geekbench with an MT6833P processor un the hood. As I’ve mentioned before, here is the disappointment. This chipset is just the Dimensity 700 SoC that can be found on the POCO M3 Pro 5G.

While the Dimensity 700 is a good chips4et for the low-end segment with 5G connectivity, there are better options already. MediaTek already has the Dimensity 720 SoC which is an incremental upgrade over the last year’s SoC. There is also the newer Dimensity 810 SoC which is faster and will be present on the Chinese Redmi Note 11. Previous rumors were pointing the POCO M4 Pro 5G to be based in the Redmi Note 11, but that does not seem to be the case. 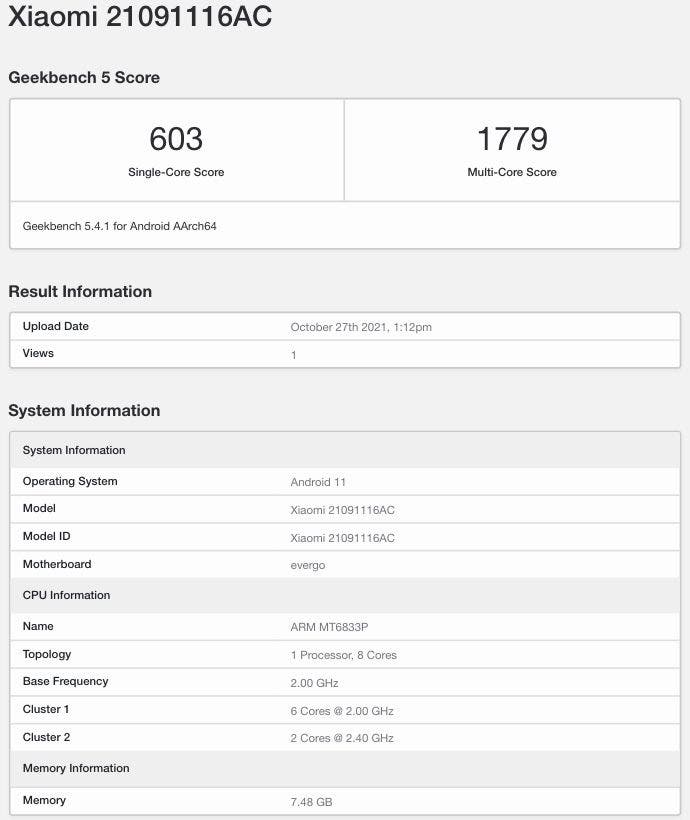 Xiaomi will be recycling the Dimensity 700 for another generation. The good side is that the device will be paired with 8 GB of RAM which is a very good amount. However, we suspect that a 6 GB variant will also be available at a lower price tag. The device scored 603 points in the Single-Core tests and 1,779 points in the multi-core department. The device runs Android 11 straight out of the box which isn’t a surprise. We expect the Xiaomi 12 series to be the first device with Android 12 firmware. The POCO M4 Pro 5G should come with MIUI 12.5 Enhanced straight out of the box.

According to TENAA, the device weighs 195 grams and 8.75 mm. It will flaunt a 6.6-inch Full HD+ OLED display with 2,400 x 1,080 pixels. The device will be quite colorful with Orange, Red, Yellow, Green, Blue, Purple, White, Gray, and other color options.
Source/VIA :
MySmartPrice

Next Google's Tensor, a machine learning-centric chip, has been crushed by Apple A15 in Machine Learning