Today, popular Weibo leakster, @DCS released two images of the tempered film of the upcoming Xiaomi 12. According to the images, the Xiaomi 12 will come with a hyperboloid display, a center punch-hole as well as an under-screen fingerprint sensor. The Xiaomi 12 series will come with Qualcomm’s latest flagship processor. Last year, the Xiaomi Mi 11 was the first smartphone to use the Snapdragon 888. This year, Xiaomi 12 may launch the Snapdragon 898 SoC. 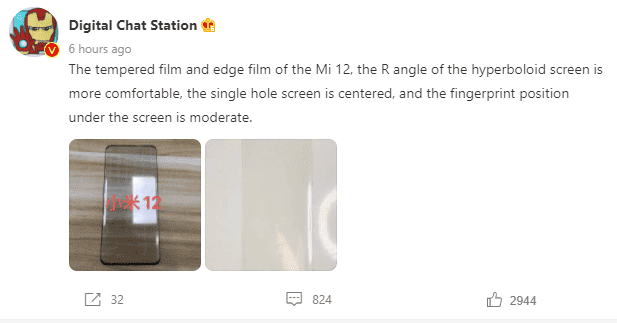 Qualcomm’s next-generation Snapdragon 8 series is Snapdragon 898. This chip will use Samsung’s 4nm manufacturing process and will debut in December this year. According to reports, the Xiaomi 12 launch will be like last year’s Xiaomi Mi 11 series. The company will unveil the regular model in December this year. However, the higher Pro model and Ultra model will arrive in March next year.

If this is the case, then the Xiaomi 12 will most likely be the first smartphone to use this chip. With reference to the Xiaomi Mi 11, this new flagship will cost about $650.