Apple cannot boast of a dominant market share in terms of the number of smartphones sold. But what the company cannot refuse is the ability to earn money and consistently solid revenue from the sale of mobile devices. iPhones cannot be called cheap, of course, this cannot but affect Apple‘s income.

According to the results of the third quarter of this year, analysts at Counterpoint Technology Market Research came to the conclusion that more than a third of the revenue of the smartphone market belongs to Apple – 37%. And this despite the fact that the company delivered 48 million iPhones to the market, while Samsung was able to ship 69 million, but the share of global revenue from the sale of devices from the South Korean giant was 18%. The third quarter was also successful for Oppo, which accounted for 10% of revenue from smartphone sales. 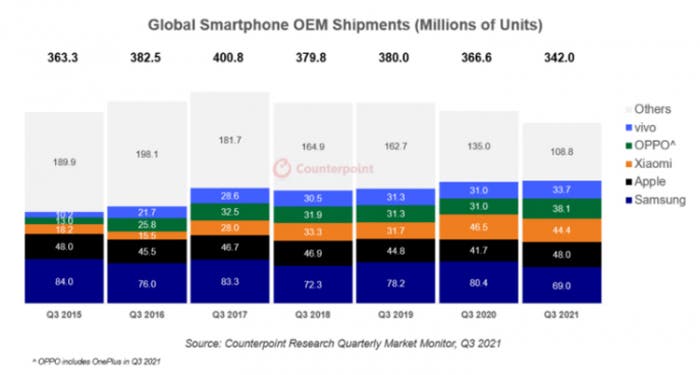 In total, 342 million pipes were delivered to the market from July to September this year, which is 6% more than a quarter earlier. But on an annualized basis, the decline was 6%. Among the reasons for the fall are the shortage of components.

If in quantitative terms there is a decline, then in monetary terms, everything is going well. Revenue from sales of smartphones was $ 100 billion and this is the best figure for the third quarter. This was influenced by the rise in the cost of devices. In their report, analysts also noted an increase in smartphone sales through online stores, as well as a serious drop in demand for smartphones in China. 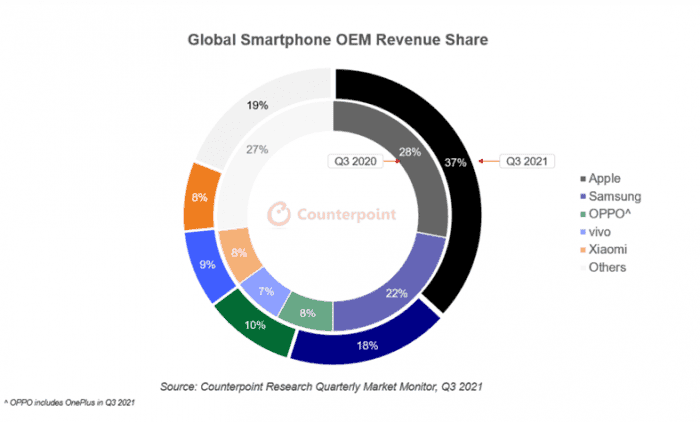 Apple earns the most on the smartphone market

Commenting on the overall market dynamics, Research Director Tarun Pathak said; “During the September quarter, we saw supply constraints that were even more severe than those experienced during the June quarter. The global semiconductor shortage finally also took a toll on the end consumers. Due to the demand-supply mismatch, most components used in smartphones have seen upward price movements; forcing some major OEMs to increase the retail prices of some models. This led to declines in shipment volumes, especially in the entry tier segment, which limited the growth potential. As a result, market demand was met by mid- to high-tier smartphones; that helped drive the quarter to a record revenue even with the declining shipments. Apple and Samsung refreshing their premium series with iPhone 13 series and Fold series respectively, added to the revenue growth”.

Commenting on the revenue dynamics, Senior Analyst Harmeet Singh Walia noted, “Global smartphone wholesale shipment revenues exceeded $100 billion*, up 12% YoY as the brands circumvented the shortage of chipsets through an aggressive promotional push for mid-priced smartphones instead of lower revenue-generating but high-volume low-end smartphones. Furthermore, the companies also actively pushed 5G-enabled phones due to the better availability of 5G components. This provided an upgrade option to customers, thereby gaining a more robust value share. Apple led the smartphone market revenue, capturing around 37% of the market while Samsung managed to increase its revenue by 32% QoQ driven by the successful launch of its Fold series”.

Next AnTuTu: Top 10 most powerful flagship and mid-range smartphones