With less than two months remaining until the end of 2021, we expect the first 2022 mobile SoCs to be revealed soon. Qualcomm has recently revealed its new mid-range lineup, and now is preparing the terrain for its next flagship SoC, which is tentatively named Snapdragon 898 SoC. The new chipset will make use of the 4 nm architecture just like MediaTek’s upcoming Dimensity 2000 and Samsung’s Exynos 2200 with AMD GPU. Interestingly, the latter is behind the 4 nm fabrication process in the Qualcomm Snapdragon 898. The first smartphones with this chip should be revealed shortly after the SD898 reveal, which should happen sometime in the next month. However, all of sudden, a smartphone has emerged with this chipset in tow. Thanks to the leak, we have our first look at the Snapdragon 898 specifications.

Xiaomi, Vivo, Samsung are among the first companies to launch a smartphone using the new chipset. Today, a smartphone has leaked with the Qualcomm SM8450. For those unaware, this may be the actual model number for Qualcomm’s next year flagship SoC. The device appeared with the Device Info HW app opened. It reveals the configuration of the upcoming smartphone. As far as the smartphone is concerned, it’s hard to determine which handset is this. Some believe it’s an upcoming Vivo smartphone, while other suspects that this is the Xiaomi 12. In fact, Xiaomi may unveil or at least announce the upcoming flagship shortly after the chipset reveal, just like it did with the Xiaomi Mi 11. So there is a strong chance that this is the Xiaomi 12. 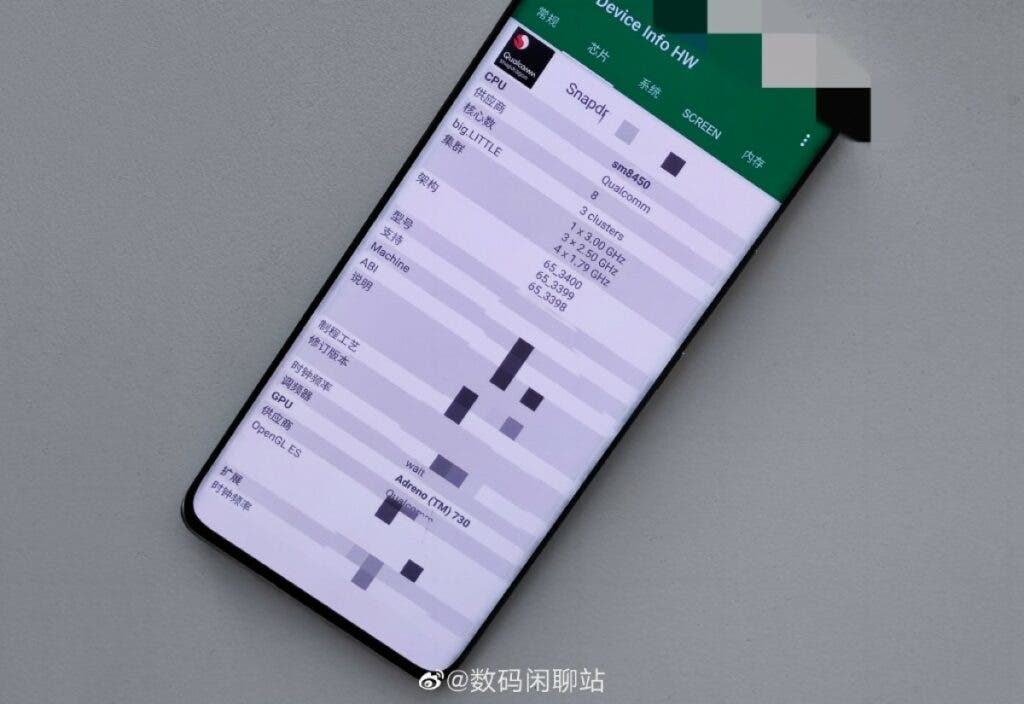 Getting back to the point, the leak further affirms some of the Snapdragon 898 specs. The device will bring a Prime core based on the ARM Cortex-X2 architecture. Furthermore, there are three ARM Cortex-A710 based mid-cores. These are clocked at 2.5 GHz and finally, four efficient ARM Cortex-A510 cores clocked at up to 1.79 GHz. Interestingly, this goes in line with the recent leaks.

Interestingly, most of the upcoming chips will use a similar architecture in the CPU composition. However, the big difference will be on the GPU part. Samsung, for instance, has an appealing marketing strategy with AMD’s mobile GPU teasing ray-tracing capabilities. Qualcomm needs to boost the performance of its GPU to be on par with Samsung’s offering. We expect a performance increase in the Adreno 730, but its exact specs haven’t been revealed so far.

More leaked details about the upcoming Qualcomm Snapdragon 898 include the arrival of a Snapdragon X65 5G model. According to reports, it offers a theoretical maximum downlink speed of 10 Gbps.

Next Chip Shortage Will Still Continue At Least A Year: Arm CEO