After months and months of speculation, Qualcomm is finally here with a new Snapdragon chip for the flagship segment. The Qualcomm Snapdragon 8 Gen 2 arrives to do two things – replace the Snapdragon 8+ Gen 1 and clean the mess made by Samsung with the vanilla. The new chipset is a major improvement on all fronts and brings cutting-edge ARMv9 architecture. Moreover, Qualcomm is raising the bar of innovation bringing Wi-Fi 7 to the market and ray-tracing.

The new Snapdragon 8 Gen 2 boasts the SM8550-AB model number. As speculated, the company is not making the move to 3nm and will stick with the 4nm node for another year. Without further ado, let’s check what this chipset has to offer. The first flagships with it are set to appear in the coming weeks.

The new 3 x Kyro CPU will deliver up to 35% performance gains with up to 40% power efficiency. Worth noting, that the new chip keeps the clock speeds of the Snapdragon 8+ Gen 1, but the configuration is different. There is a 1 x ARM Cortex-X3 (Kyro Prime) core running at 3.2 GHz. It will deliver high single-threaded performance. Interestingly, we also get 4 x Performance cores for the multi-threaded workloads running at 2.8 GHz. For the first time, the company is adopting three efficiency cores with 2.0 GHz clock speed.

The new Snapdragon 8 Gen 2 also brings support for newer memory technologies. For instance, the RAM jumps to the LPDDR5X tech at up to 4,200 MHz. For storage, we have the new UFS 4.0 format that will replace the tired UFS 3.1 standard.

We will also see significant improvements in graphics. The new Adreno GPU promises 25% higher performance with 45% more efficiency. The company joins the ray-tracing trend offering hardware-accelerated ray-tracing. That is an important step for the mobile gaming scene, after all, mobile game developers will have bigger reasons to explore ray-tracing in mobile games. The GPU is the first to support Vulkan 1.3 which comes along with OpenGL ES 3.2. 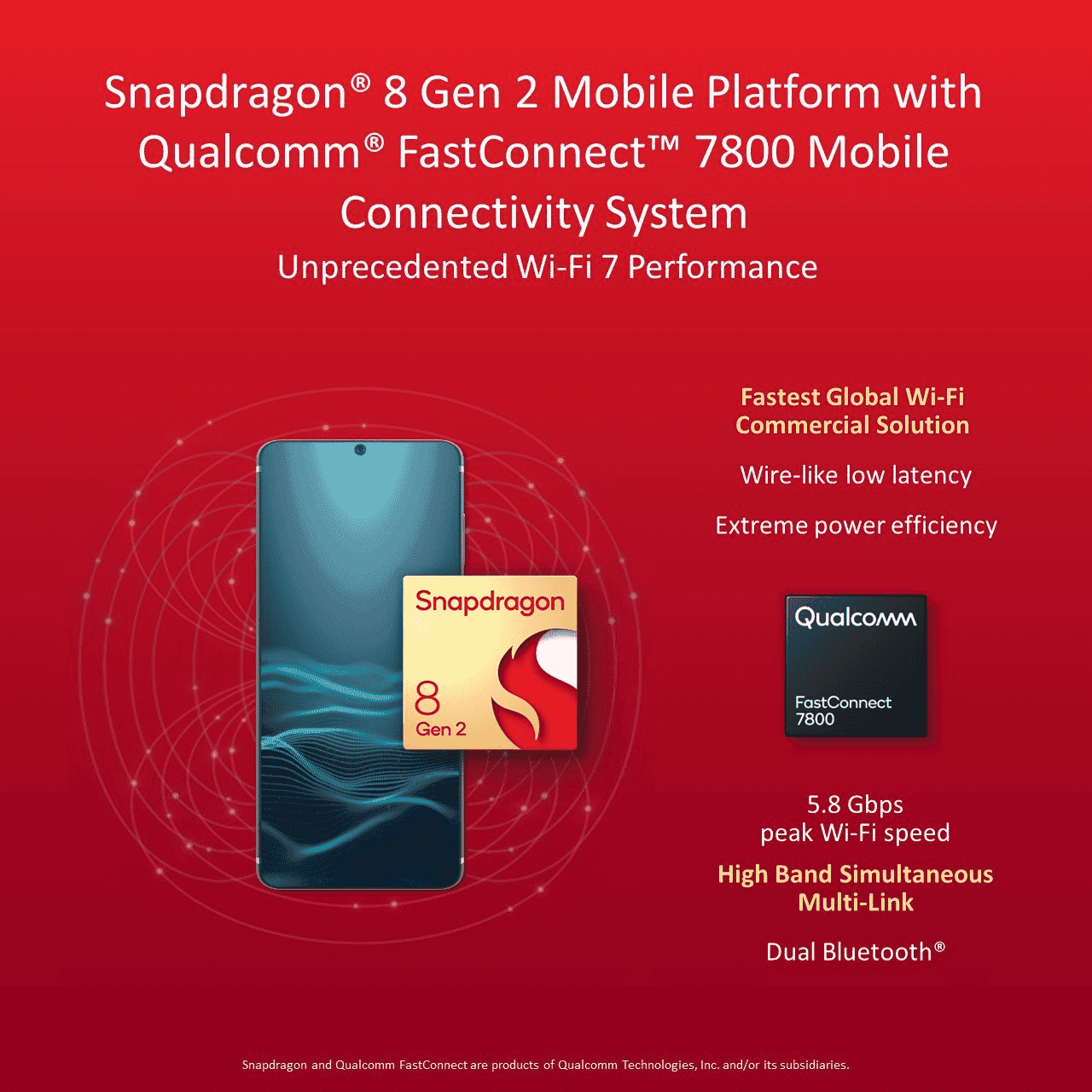 Going for technical details, the Snapdragon 8 Gen 2 GPU (likely Adreno 740) supports QHD+ resolution at up to 144 Hz or 4K at up to 60 Hz. It also supports external displays up to 4K at 60 Hz. HDR 10+ and Dolby Vision techs are also here. Last but not least, AV1 video decoding is supported, allowing streams up to 8K at 60fps.

The new Snapdragon 8 Gen 2 will offer support for Sony sensors with Digital Overlap HDR (DOL-HDR). The ISOCELL 200 MP HP3 camera also got special tweaks to work with the Snapdragon ISP. That just re-affirms the Galaxy S23 Ultra with this camera and chipset. The SoC brings a triple 18-bit ISP. It can handle up to three 36 MP cameras or up to 200 MP for a single camera. The 108 MP sensors are also supported with zero shutter lag.

For video recording, the Snapdragon 8 Gen 2 can record 8K HDR footage at 30 fps and capture 64 MP photos simultaneously. It can also do 4K at 120 fps, and slow-motion videos at 720p@960fps. The SoC supports multiple HDR formats. The list includes HDR 10+, HLG, and Dolby Vision.

The Snapdragon 8 Gen 2 brings an all-new Snapdragon X70 modem. Obviously, we are getting improvements for the 5G, but it’s close to the 8+ Gen 1. The real upgrade is in the Wi-Fi. The Wi-Fi 7 era will begin soon and the new SoC is ready for that. It features the upcoming 802.11be (Wi-Fi 7 standard) through the new FastConnect 78000 system. It tops out at 5.8 Gbps. Besides the speed, the new standard also lowers latency. 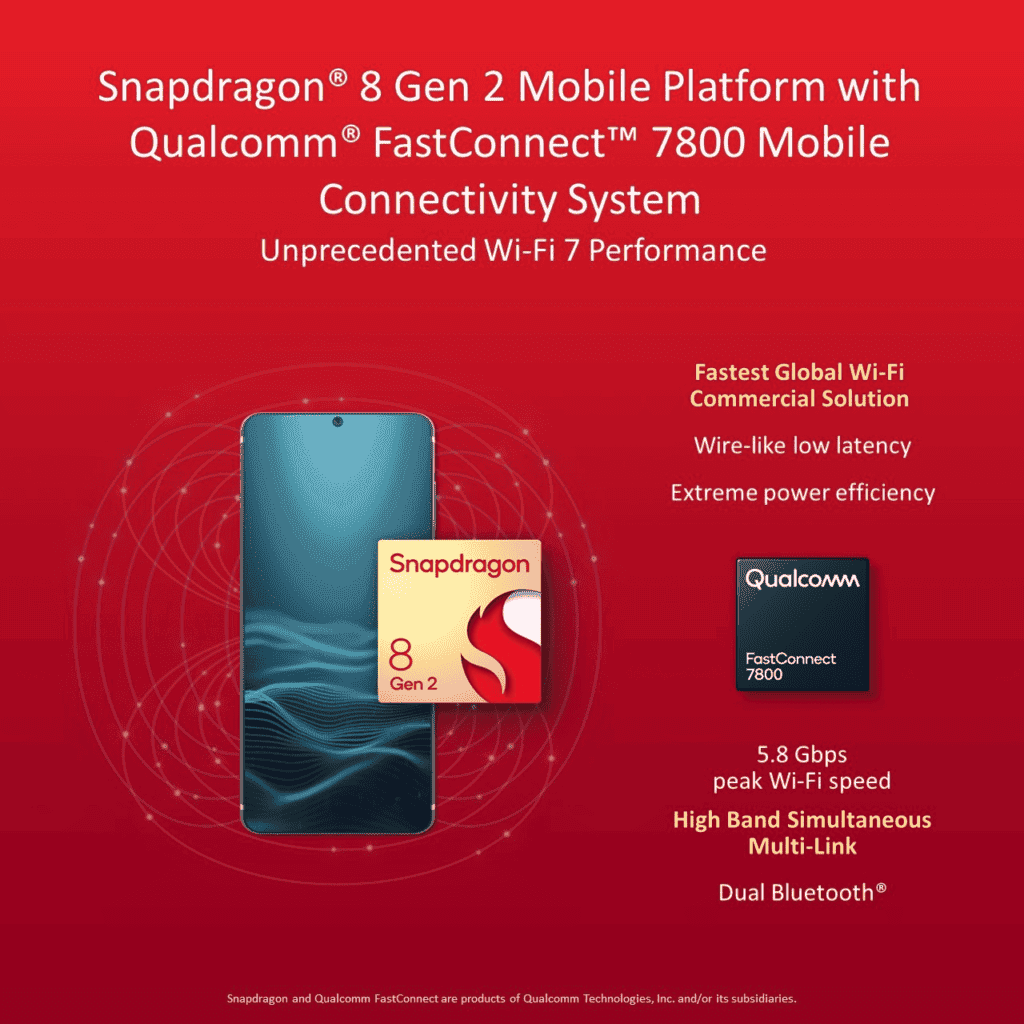 Other connectivity details include Bluetooth 5.3, giving companies another reason to adopt the standard. There is also the latest Snapdragon Sound System with improvements for streaming and low latency for gaming.

When it comes to the wired department, the 8 Gen 2 has USB 3.1 support with Quick Charge 5. However, it will be up to OEMs to use it.

It’s already a tradition to announce brands that will adopt the new Snapdragon platform. This year’s Snapdragon Summit was not an exception. The company confirms a wide variety of OEMs picking the Snapdragon 8 Gen 2 for new flagships. The list includes ASUS, Honor, iQOO, Motorola, Nubia, OnePlus, Oppo, Red Magic, Sharp, Sony, Vivo, Xiaomi, Meizu (yes), and ZTE. Curiously, Samsung is not on this list, but the Galaxy S23 series will pack the new chipset. 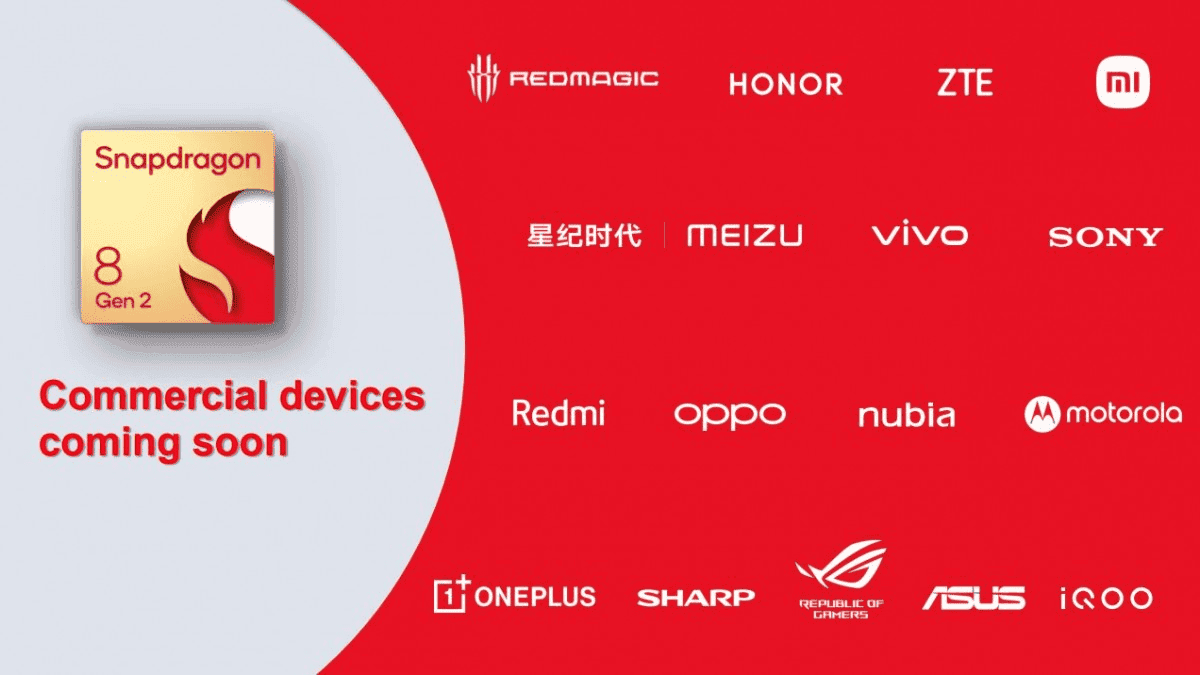 The SD 8 Gen 2 will compete with the Dimensity 8200 in the flagship market. But we expect it to win this battle for another year thanks to the tradition. The Vivo X90 Pro+ will probably be among the first phones with the new chipset, Xiaomi is also coming with the Xiaomi 13 series.

Next iQOO 11 Pro India launch on the horizon, here's when its coming