Today, Xiaomi Group partner and Redmi Brand General Manager, Lu Weibing, revealed some of the company’s plans for next year. According to him, he is standing at the end of 2021 and planning 2022 strategies and goals. Lu Weibing pointed out that 2022 is the first year of the three-year strategy of becoming the world’s number one. In addition, he reveals that Xiaomi will be steady and step up to the next level. The company is now focusing on claiming the number one spot over the next three years. Thus, its competitors need to be alert as Xiaomi “steps up” its game. 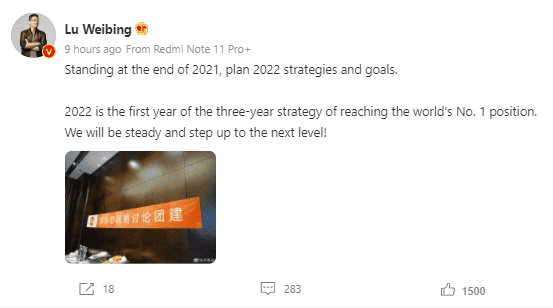 Xiaomi’s founder, chairman, and CEO, Lei Jun announced in his annual speech in August this year that Xiaomi’s next goal is to win the world’s number one in three years. At that time, Canalys, IDC, Counterpoint, Strategy Analytics, and other research institutions successively released the second quarter data of the global smartphone market in 2021. Xiaomi’s global market share surpasses Apple and was promoted to second place in the world.

Last month, Canalys, Strategy Analytics, IDC, and other institutions announced the third-quarter data of the global smartphone market in 2021, with Samsung, Apple, and Xiaomi ranking the top three.

Xiaomi is quite popular in China

Xiaomi’s popularity in China once again showed itself as the company makes billions of dollars within a few days. The annual Chinese 11.11 Shopping Festival is not only a good time for consumers to buy discount products, it is also a time for manufacturers to hand in their transcripts. Major manufacturers will announce their own battle reports one after another. This afternoon, the official Weibo account of Xiaomi officially announced that as of 18:21:07 on November 5th, Xiaomi’s 11.11 (Double 11) omni-channel payment exceeds 10 billion yuan ($1.56 billion). The Chinese 11.11 sale is actually on November 11th, however, many manufacturers commence sales from the beginning of the month.

According to Jingdong sales rankings, Xiaomi smartphones currently rank first on its purchase list. Furthermore, its TVs, notebooks, and other products occupy top spots. Many of its products has the single category champion award. This shows the popularity of Xiaomi products in China. Just as its offline sales performance, its online market is also doing very well. According to Redmi’s general manager, Lu Weibing, the company will pay more attention to the offline market in the future. He said that Xiaomi’s new internal goal is to open 30,000 stores within 2-3 years. The company hopes to form a comprehensive coverage of China’s county and township markets.

Next Vivo NEX 5 will arrive with 7 cameras, one of which is under the display