The end of 2021 is nearing and we’re expecting major chipset makers to present their next contenders for the market in 2022. This year, we saw the rise of MediaTek that became the largest chipmaker in the world. The fabless chip maker has enhanced its portfolio with the Dimensity chips featuring 5G connectivity, stellar performance, and low price. The Dimensity 1200 was the company’s premium offering for 2021 and was present in a large part of smartphones in the market. However, this chipset still falls behind Qualcomm and Samsung premium chipsets. However, things will change with the MediaTek Dimensity 2000 SoC. Today, the first benchmark has revealed the powers of this beast.

The Dimensity 1200 is a solid chipset but falls behind the likes of the Snapdragon 888 and even the Snapdragon 870. With the very positive results achieved in 2021, the Taiwanese company is now confident and will deploy a true flagship chipset in the form of Dimensity 2000 SoC. This chipset will have specs comparable to the Snapdragon 898 and Exynos 2200, will bring the ARM Cortex-X2 cores, and will also be based on the same 4 nm architecture. While Qualcomm will rely on Samsung 4 nm manufacturing process, MediaTek will stick with TSMC.

Today the very reliable tipster Ice Universe has shared a screenshot of AnTuTu showing the very first benchmark run performed by the smartphone. The identity of this smartphone is not revealed, perhaps it’s based on a test unit for the chipset. However, the result is enough to show that MediaTek isn’t playing with its next flagship-tier chip. The Dimensity 2000 has broken some barriers in the AnTuTu Benchmark reaching a score of whopping 1,002,220 points. Curiously, the app shows two warnings stating that the score has not been verified online, and also that it’s beyond the “normal” level. Obviously, AnTuTu isn’t ready for the 2022 chipsets yet, but we assume that a 1 Million+ score will become the new “normal”. Unless that the app developers bring the “score base” a little down. 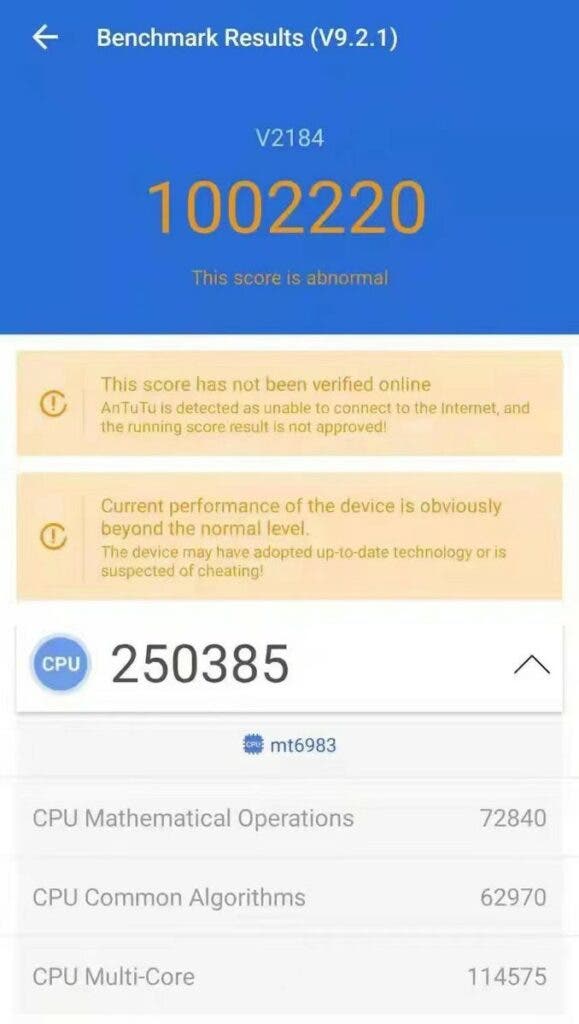 Interestingly, the MediaTek Dimensity 2000 smartphone that ran AnTuTu probably is an unfinished product. So we may have even higher results with the final product. Of course, the score will vary from company to company. MediaTek has improved the relationship with many smartphone makers allowing them to tweak and help with the development of future Dimensity chips. For instance, we saw OnePlus and MediaTek collaborating for the development of Dimensity 1200 AI. In the same way, the company has worked alongside Xiaomi.

The Qualcomm Snapdragon 898 SoC should make its first appearance with the Xiaomi 12 in December. Samsung will wait until February 2022 to disclose its Galaxy S22 smartphones. The new handsets will also mark the debut of the Exynos 2200 with AMD GPU. The only question that remains is which company will be the one launching the first Dimensity 2000 smartphone. Strong candidates are Realme, Oppo, Vivo, and iQOO.

Previous Twitch app is now available on the Nintendo Switch