Many people know that Huawei collaborated with Leica for quite a long time, but after the notorious events, it shifted its focus to another manufacturer. An agreement was signed between Sharp and Leica, which resulted in the emergence of the AQUOS R6 and Leitz Phone 1 photo flagships. But the German company might not seem to have enough Japanese people, and it could go on to collaborate with another Chinese manufacturer.

Back in May, the news leaked on the network that Xiaomi would replace Huawei. Honor was also named among the possible companions of the German company. And now, after six months, the famous network insider Digital Chat Station announced a possible partnership between Xiaomi and Leica. He posted a picture of the Xiaomi Mi 11 Ultra on the Internet, where the Leica logo is depicted on an additional miniature display. It is quite logical to interpret this post as an indication that the Xiaomi 12 Ultra may receive Leica optics.

Whether this is true or not, we will find out at the beginning of next year; when we are waiting for the announcement of Xiaomi 12 Pro and Xiaomi 12 Ultra. The Ultra version is expected to offer three sensors in the main camera, all of which can be 50MP. One of them should be a 5x optical zoom lens with a size of 1 / 1.5ʺ. There is no doubt that they will offer an AMOLED display with an increased refresh rate; up to 12 GB of RAM and up to 512 GB of memory; a battery with a capacity of at least 4500 mAh and fast charging at 120 watts. 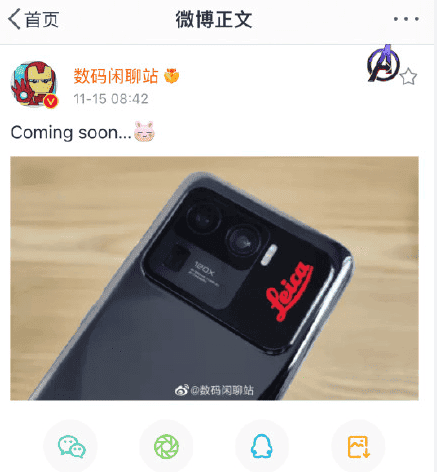 According to Canalys estimates, in the third quarter of this year; approximately 78.8 million smartphones were sold in the PRC, which is 5% less than a year ago. The leader is Vivo with a share of about 23%. Then there are Oppo and Honor, which occupy 21% and 18% of the Chinese market, respectively. Xiaomi is now in fourth position with 14%.

It is noted that for this Xiaomi will actively develop a retail network. The fact is that in China, about 70% of phone purchases are made through regular offline stores.

Now the local Xiaomi network has approximately 10 thousand stores. Within three years, their number will be increased to 30 thousand. But even in this case, as observers say, it will be difficult for the company to squeeze out competitors.