Samsung is gearing up to introduce a bunch of new tablets. Earlier this year, the company launched the Galaxy Tab A7 Lite and also introduced a Galaxy Tab S7 Fan Edition in India. Now, the company is working on a new generation of tablets that could launch in the coming weeks. One of the upcoming tablets is the Samsung Galaxy Tab A8. Today, the device is giving a step close to launch as it has passed through the Wi-Fi Alliance. Unfortunately, Samsung is keeping a low profile at the moment, so we don’t know exactly when and how many tablets will be revealed. However, we already know what to expect from the mid-range tablet. 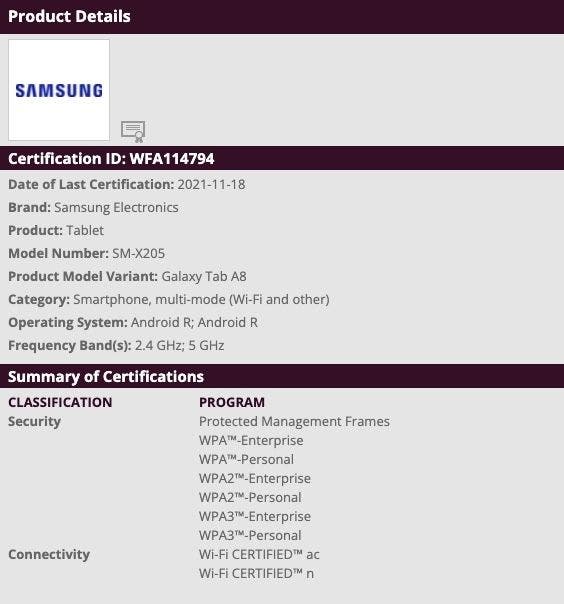 The Samsung Galaxy Tab A8 has visited the Geekbench benchmark a few days ago. Now, it was spotted on the Wi-Fi Alliance Certification website. It reveals the model number of the tablet that stands as SM-X205. The certification website also confirms the device’s moniker and Wi-Fi frequency bands. As a good 2021 tablet, it is coming with support for 2.4 GHz and 5 GHz WiFi. Unfortunately, we don’t think that will carry Wi-Fi 6 support. Unfortunately, that is where the Wi-Fi Alliance details end.

Thanks to the previously leaked Geekbench benchmark, we also know some additional details about the tablet. First of all, it will bet on a Unisoc T618 chipset under the hood. This chipset brings ARM Cortex-A75 big cores and a Mali-G52 MC2. The device will also have 3 GB of RAM which should ensure an acceptable multi-tasking experience. The tablet runs Android 11 straight out of the box with a layer of One UI 3.0 on top.

Other details of the handset have also leaked. The design renders leaked last month suggest that it will sport a 10.5-inch TFT display with a WUXGA resolution, which is 1,900 x 1,200 pixels. The screen itself will have a 60 Hz refresh rate and family thick bezels around it. There is a single front-facing camera on the right edge when held vertically. It has a 5 MP resolution which should be decent for video calls, but we don’t expect wonders for selfie photography.

The Samsung Galaxy Tab A8 is a low-end tablet from Samsung, it’s a competitor in line with the Realme Pad. Samsung certainly wants to bring options for the multiple price segments and keep its market share. After all, there are many other brands joining this segment in response to the recent demand.

Previous Fortnite shuts down its servers in China

Next Oppo A55s launched with Snapdragon 480 and 90Hz display