Vivo V23e 5G smartphone has been spotted on Geekbench with specifications, model number, and other vital information. The Chinese smartphone brand will be unveiling its new smartphone in Thailand later this month. However, before it goes official, the Vivo V23e 5G has been making multiple appearances online in the form of leaks (via Gadgets 360). Earlier this week, a fresh leak revealed the RAM, storage, and color options of the upcoming handset.

Noted leaker Sudhanshu Ambhore tweeted official Vivo V23e 5G renders, giving us our first look at the upcoming smartphone. Aside from that, the tipster divulged details about the handset’s highly appealing color options. In his tweet, Sudhanshu claims that the Vivo V23e 5G will be available in Sunshine Coast and Moonlight Shadow color options. To recall, Sudhanshu had shared press renders and full specifications of the V23e on November 7. Now, the Vivo V23e 5G smartphone’s specifications have surfaced online again via Geekbench listing.

The much-awaited Vivo V23e 5G smartphone has been spotted on Geekbench. As expected, the Geekbench listing reveals some key specifications including chipset, RAM, Android version of the smartphone. The V23e 5G smartphone from Vivo carries model number V2126 on Geekbench. Moreover, a dedicated microsite has gone live on the company’s Thailand website, showcasing the entire design of the smartphone. Moreover, it suggests that the phone will house a 48MP front shooter, three rear-mounted cameras, and a waterdrop notch display. 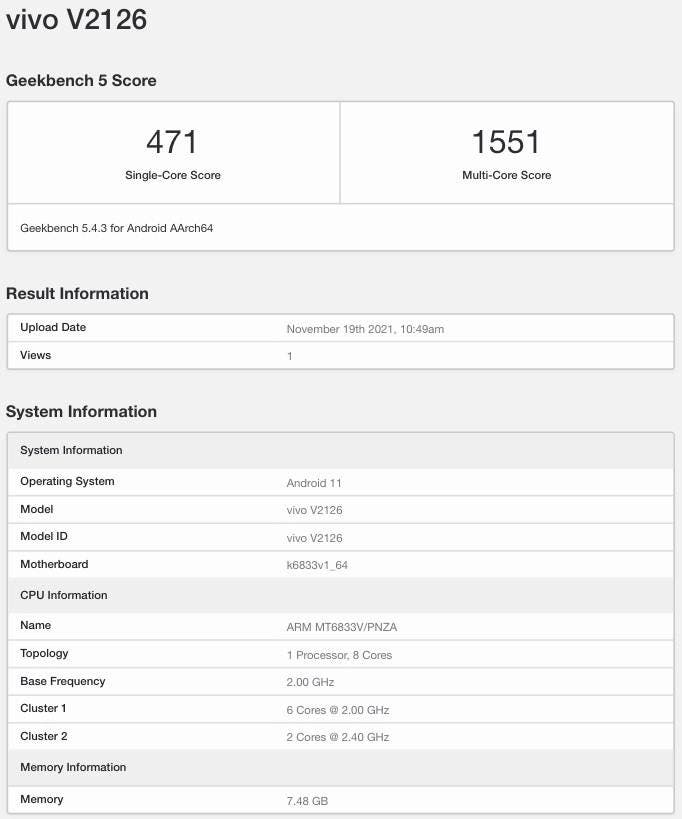 Furthermore, the Geekbench listing shows that the Vivo phone with model number V2126 will pack the MT6833V/PNZA. This is the model number of the 5G-enabled MediaTek Dimensity 810 SoC. Moreover, the processor is paired with 8GB of RAM. However, more memory options are likely to be announced at the time of launch. The handset scored 471 points in the single-core and 1,551 points in the multi-core test. Also, the listing suggests that the phone will run Android 11 out of the box. The OS will probably have FuntouchOS skin on top.

Vivo V23e 5G smartphone seems to draw inspiration from the 4G variant as far as the outward appearance is concerned. The right spine houses the volume up and down and the power buttons. The bottom features the speaker grills, microphones, and the USB Type-C port. For optics, the phone houses three cameras at the back. This rectangular camera module houses the main camera, an ultra-wide-angle, and a macro sensor. Aside from that, it accommodates an LED flash. The phone’s flat-screen complement its overall boxy design.

In terms of design, the V23e 5G looks pretty similar to the iPhone 12,13 series. Sudhanshu has previously tipped that the phone could ship with 8GB of RAM and offer 128GB of onboard storage capacity.

Next Rockstar to Fix GTA The Trilogy-Definitive Edition Issues via Title Update, Original Titles to Be Relisted Soon

Vivo V23e 5G will launch in India on February 21