Vivo certainly makes its name every year with the exciting devices coming under the X-series or even under the iQOO brand. However, the Chinese brand has a lot more to offer. There is a very compelling lineup of mid-range smartphones with the stellar camera performance. The Vivo V-series comes for those who want an averaged priced smartphone that can capture good photos. The Chinese firm is preparing a new refresh for its V-series of smartphones. It took a while, but it seems that the Vivo V21 series is finally being replaced. On November 23, the company will introduce its Vivo V23e 5G in Thailand.

Interestingly, the Vivo V23e already made an appearance in Vietnam with a 4G variant. Now, however, the company is bringing a new variant with support for the fifth-generation networks. We can expect a total difference chipset at the bare minimum. Thankfully, we already know a lot of what to expect from the handset ahead of its launch.

The Vivo V23e will pack a waterdrop notch at the top of the display. Interestingly, it seems to be keeping this characteristic from the V21 series. This cutout will serve as a home for the 44 MP selfie snapper. Once again, Vivo wants to affirm the V-series prowess in the selfie department. The device will have a slightly thick chin bezel which confirms it’s not a premium smartphone. Despite this, you can still expect an AMOLED display with an in-display fingerprint scanner which is not common among mid-range smartphones.

Moving around to the back, the handset has a triple-camera setup with an LED flash. Unfortunately, the specs of the camera are still unknown. However, rumors suggest it will have a 48 MP / 50 MP primary camera alongside an 8 MP ultrawide and a 2 MP depth sensor. Vivo could swap the ultrawide camera with a 2 MP macro camera sensor as well. 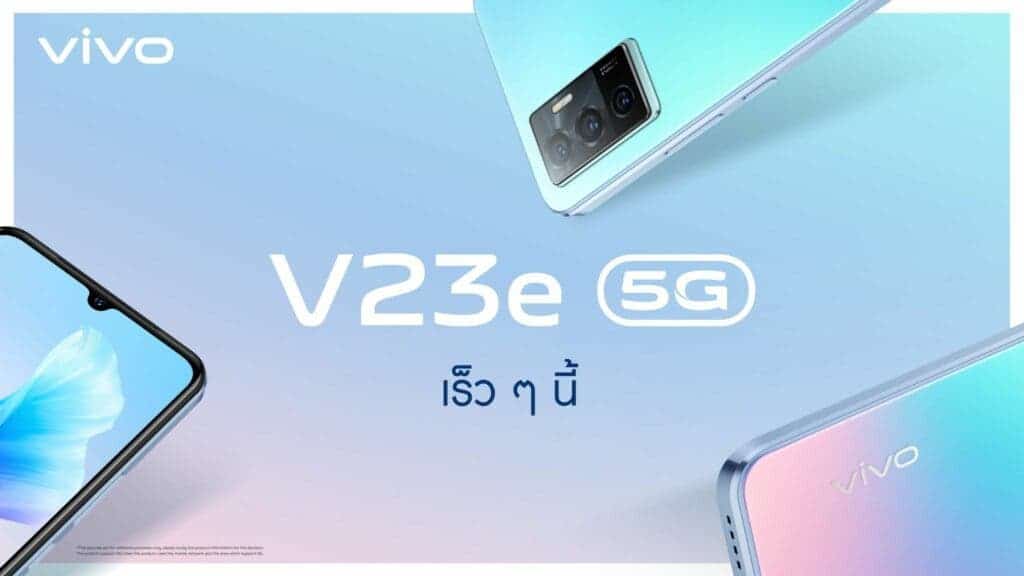 The teaser images also confirm the two color options for the smartphone. It will arrive in gradient shades of Black and Blue. The device will come with the power and volume keys on the right edge. The bottom part houses the single speaker grille and the USB Type-C port. Unfortunately, there is no sign of a 3.5 mm headphone jack.

According to rumors, the handset will have its powers granted by the MediaTek Dimensity 810 SoC. We expect a battery bigger than 4,000 mAh with at least 44 W fast-charging. By the time of its release, it will still run Android 11 with Funtouch OS 12.