One year has passed since Honor has become an independent company. Last year, the company was sold to a Chinese consortium in a bid to free it from the ties applied by the US ban against Huawei. This year, the company has been on a roll with many smartphones coming. In less than one year of operating as an independent company, Honor acquired third place in the Chinese market. This mainly comes from the Honor 50 series launch which is selling well in the country. This lineup is about to get a replacement in form of the Honor 60 series.

It’s funny to hear about the Honor 60 launch as the Honor 50 phones were just released outside in China. Anyway, as far as the Chinese market is concerned, nearly six months seems to be a good time window for a new replacement. Chinese brands like Oppo, Vivo have pretty much established this five to six months interval between new mid-range smartphones. The Honor 60 will reach the market on December 1, and the company is teasing the new smartphones.

Honor 60 keeps the dual-circle design of its predecessor

Interestingly, the Honor 60 series will stick with a very iconic design in Honor 50 series. It will stick with the dual-circle design for the rear camera setup. Today, the company has revealed the entirety of the Honor 60 design. As per the report, it is a mix between the Honor 50 and Redmi K40 design. One camera sits inside of each big circle and one extra shooter in between them on the oval island. The LED flash will be on the side. 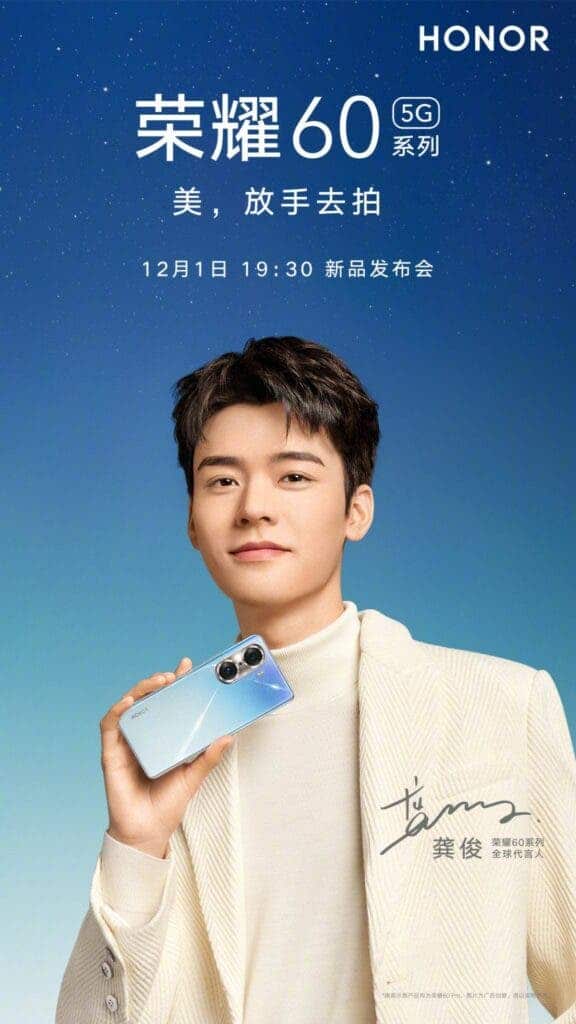 The concept behind this design focuses on the youthful audience. The starry design on the back will certainly make this device stand against the competition. After all, we’re seeing similar smartphones coming every day, and at least when it comes to the rear design, Honor is trying to be different.

The Honor 60 smartphones will be revealed in just a couple of days. Of course, Honor is not very good at holding secrets and will likely keep revealing teasers and teasers for the upcoming days. Again, this release will be exclusive to the Chinese market at this time. However, the devices may hit global customers a few months later, possibly in Q1 2022. Once they reach the global audience, they will come with Google Play Services and 5G supports as Honor is completely free from the issues that keep plaguing Huawei.