Intel remains the largest player in the graphics accelerator market, although formally it still supplies mainly central processors with integrated graphics. Next comes NVIDIA, and AMD closes the top three. Jon Peddie Research has published the latest statistics on the PC graphics market.

The data available in the free version of the report indicates that 101 million GPUs were delivered to the market in the third quarter, including those integrated into the central ones. This is 12% more than it was possible to ship in the same period last year, but 18.2% less than in the previous quarter. Directly the volume of shipments of central processors for the year increased by 9.2%, but consistently decreased by 23.1%. Intel and AMD executives have already noted at recent quarterly events that customers simply cannot produce computers in the desired quantities due to a shortage of related components, and therefore do not purchase CPUs in excess of the required quantity. 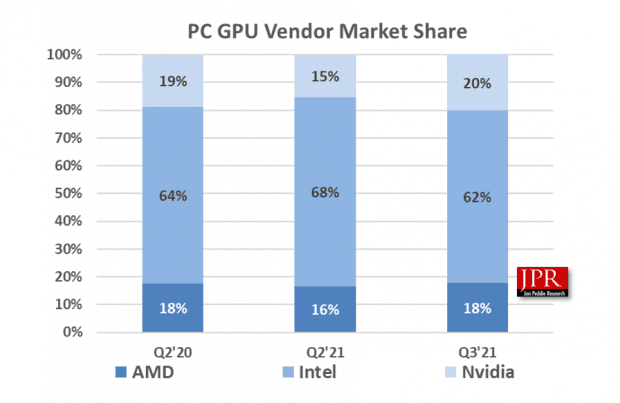 If we look at the balance of power in the PC graphics market as a whole; Intel’s share has consistently declined from 68 to 62%; AMD’s share has grown by almost 2 percentage points to 18%; and NVIDIA’s positions have strengthened by almost 5 percentage points to 20%. If we consider the volumes of GPU shipments; then in the case of Intel they consistently decreased by 25.6%, in the case of AMD they decreased by 11.4%; but NVIDIA increased the number of shipped GPUs by 8% compared to the second quarter.

In the segment of discrete graphics, the alignment of forces has not changed; NVIDIA products still account for 83% of the market, and AMD is content with 17%. At the same time, the number of video cards shipped in the third quarter sequentially increased by 10.9%. In fact, NVIDIA in this sense was helped by a higher dependence on discrete graphics; which in modern conditions is used to speed up computing and mining, and not only in games. Intel and AMD, more dependent on the laptop market, were forced to reduce the supply of graphics processors in the face of a shortage of related components.

Overall, Jon Peddie Research expects GPU shipments to decline by an average of 1.1% annually through 2025; with more than 3.2 billion GPUs in operation by the end of the forecast period. By the same time, 31% of all PCs will be equipped with discrete graphics. The authors of the forecast believe that the situation with the supply of components in the PC market will not return to normal until the end of 2022.

Next YouTube TV has issues on smart TVs and streaming devices