The Chinese smartphone manufacturer has been focusing on offering reasonably-priced smartphones. The much=awaited Realme GT 2 Pro 5G is likely to be another such phone. If rumors making the rounds online prove to be true, the Realme GT 2 Pro 5G smartphone will go on sale in China early next year. As mentioned, it will be the brand’s first Snapdragon 8 Gen1-powered handset. Now, a noted tipster has shared the AnTuTu listing of the upcoming smartphone.

The Realme GT 2 Pro 5G smartphone has acquired an unsurpassed score on AnTuTu benchmarking app. This suggests that the phone will be packing some highly competent hardware inside. This piece of information comes from a Weibo post from Digital Chat Station. DCS has shared a screenshot of the Realme RMX3300 device’s AnTuTu listing. According to the tipster, the aforesaid device is the Realme GT 2 Pro. In other words, DCS suggests that the model numbers RMX3301 and RMX3300 belong to the same device. 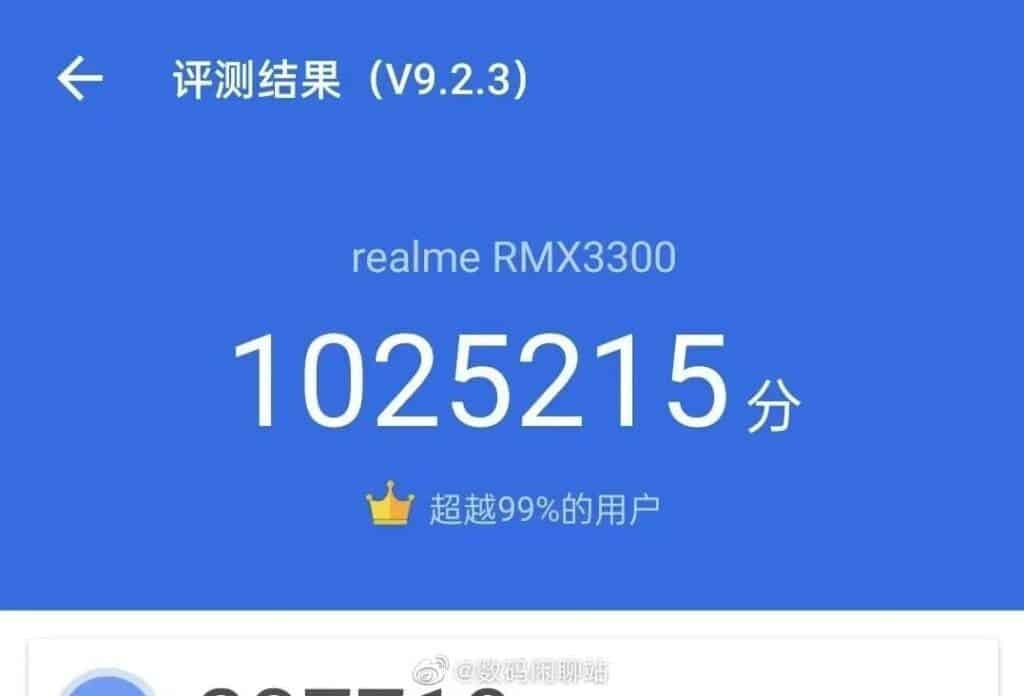 The image shared by the tipster showcases the Realme GT 2 Pro smartphone’s unmatched AnTuTu score of 1,025,215. This is by far the highest score ever acquired by a smartphone on the AnTuTu benchmarking platform. A device with a slightly higher score of 1,350,020 made an appearance on AnTuTu recently. Regrettably, details about the device are still scarce. Furthermore, the screengrab suggests that the Realme GT 2 Pro 5G will not pack Qualcomm Snapdragon 888 chipset as some earlier reports suggested.

The benchmarking platform implies that the phone will come with a more powerful Snapdragon 898 SoC, instead. To recall, the upcoming smartphone is tipped to come with a 6.51-inch AMOLED display. The screen will reportedly deliver an FHD+ resolution, paired with a refresh rate of 120Hz. For optics, the phone is likely to house a rear-mounted, OIS-assisted 50MP primary camera. Upfront, the phone will house a 32MP selfie camera.

Aside from that, the Realme GT 2 Pro could draw the juices from a 5,000mAh battery that supports 125W fast charging. Furthermore, it will probably ship with LPPDR5X RAM and offer a UFS 3.1 storage system. The phone will reportedly run Android 11 out of the box with Realme UI 3.0 on top. The Realme GT 2 Pro 5G is likely to set you back $629 (about INR 46,900) when it goes official next year.

Next Xiaomi plans to release the Redmi K50 SE smartphone