The last time that Apple hit the top smartphone brand position in China was December 2015. Now, after six years, the company has this position again. In October 2021, Apple grew 46% month-on-month, leading the way among all mobile phone brands in the Chinese market. The latest report from Counterpoint Research shows that Apple surpassed Vivo in October 2021 to become the largest smartphone manufacturer in the Chinese market. Many thanks to the iPhone 13 series, Apple is now number one in China. Due to the sales of the iPhone 13 series, Apple’s sales increased by 46% month-on-month. 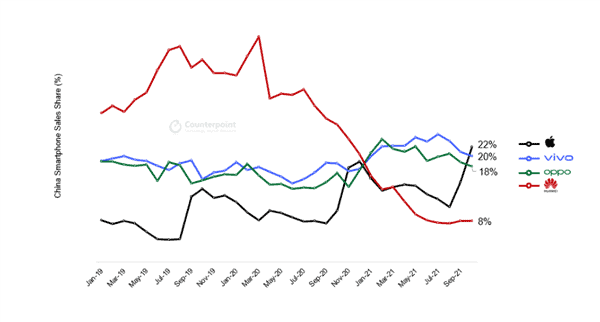 In contrast, the Chinese smartphone market saw a month-on-month increase of 2% in October. While iPhone sales are increasing, sales of other major mobile phone manufacturers have declined. Speaking of growth in the Chinese market, Counterpoint Research research director, Tarun Pathak said that this is mainly due to the promotion of the iPhone 13. At the same time, with a strong brand appeal, Apple is gaining the most from the vacancies left by Huawei’s high-end market. He said, “If it weren’t for chip shortage, Apple might win more market share. Relative to other mobile phone manufacturers, Apple’s supply chain management is better”.

Varun Mishra, a senior analyst at Counterpoint Research, added: “On the whole, the growth rate of the Chinese smartphone market has slowed slightly this year. However, Apple’s growth is a positive sign. This shows that Chinese smartphone users are maturing quickly and want to buy more high-end devices. For brands, this may be a good opportunity…In the case of a shortage of parts, the supply chain is also giving priority to high-end and high-margin equipment.”

Apple worked for this achievement