OnePlus CEO Pete Lau announced that the upcoming OnePlus 10 series smartphones will receive the latest Qualcomm Snapdragon 8 Gen 1 processor. The announcement of devices in the Chinese market is expected in January.

According to Mr. Lau, OnePlus is optimizing smartphone software specifically for the Snapdragon 8 Gen 1 platform. This means that the devices will provide maximum performance.

It is known that the series will include the basic version of the OnePlus 10 and the variant of the OnePlus 10 Pro. The latter is credited with the presence of a 6.7-inch Quad HD + AMOLED display with a refresh rate of up to 120 Hz, 8/12 GB of LPDDR5 RAM and a UFS 3.1 flash drive with a capacity of 128/256 GB.

The equipment will include a triple camera developed in partnership with Hasselblad. It will combine a 48-megapixel sensor, a 50-megapixel unit with wide-angle optics and an 8-megapixel telephoto module. 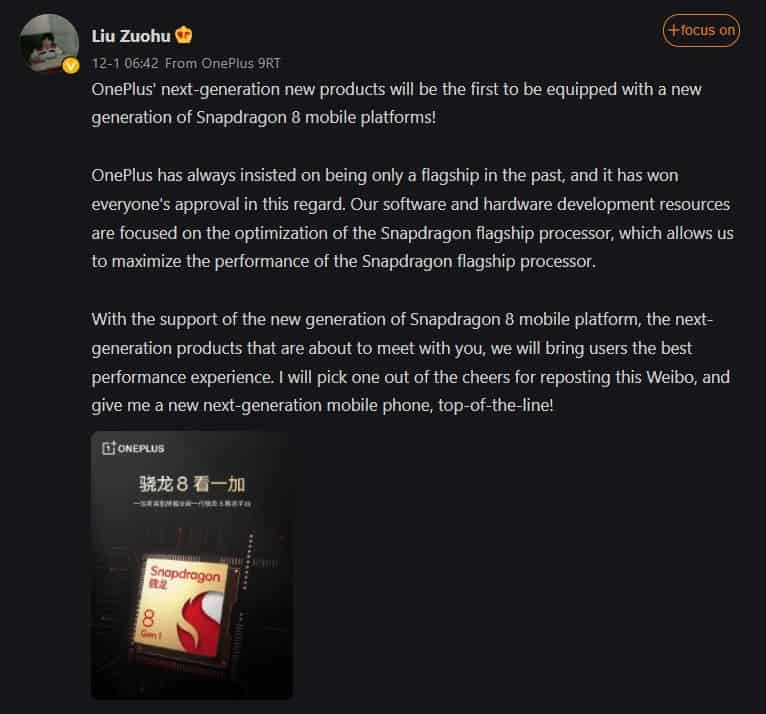 The OnePlus 10 is reportedly launching earlier than usual; so that the smartphone can compete with the Samsung Galaxy S22 at launch. According to rumors, on January 4, Samsung is going to introduce the budget flagship Galaxy S21 FE; and on February 8, flagships of the Galaxy S22 will be available. We are talking about unusual for OnePlus the timing of the launch of flagship solutions. The OnePlus 9 series was unveiled at the end of March this year. However, the company missed the launch of improved versions of flagships with the “T” suffix; which usually occurs in the fall. Probably they will instead focus on preparing the OnePlus 10.

So, the OnePlus 10 will run on the upcoming flagship Qualcomm Snapdragon 8 Gen 1 chipset. Also, the device has a 6.7-inch flat screen with a 120Hz refresh rate, made using AMOLED technology. According to rumors, the smartphone will receive support for fast 125-watt charging. In addition, renders of a smartphone have recently leaked to the Network; which demonstrates a completely new design of the main camera unit for the company’s devices.

Next iOS 15.2: minors will receive warnings before sending intimate photos