The year is drawing to a close and it already seemed that all the significant novelties of this season were presented. But, we will not be bored in December. The manufacturers have prepared surprises and the race has begun for the right to be the first to present the flagship with the Snapdragon 8 Gen 1 platform; which debuted a week ago. Realme also joined the competition.

We expect that the owner of the new chip from Qualcomm will be the realme GT 2 Pro; and today the company announced the date of the announcement of the smartphone. On its Weibo page, it posted a teaser announcing that the presentation of the Realme GT 2 Pro is scheduled for December 9th. By the way, on the same day, the Moto Edge X30 will premiere; which claims the title of the first with Snapdragon 8 Gen 1.

Realme GT 2 Pro should offer a 120Hz OLED screen with QuadHD + resolution and a diagonal of 6.8 inches, a 5000 mAh battery with fast 125-watt charging, a 32-megapixel selfie module and three image sensors on the back, where two sensors must have a resolution of 50 megapixels and is complemented by an 8 megapixel module.

The smartphone should offer a display fingerprint scanner; up to 12 GB of RAM and up to 256 GB of storage; as well as the Android 12 operating system with a proprietary shell Realme Ui 3.0. The price tag on the Realme GT 2 Pro could be around $ 800. What in the end will turn out to be true, we will find out in two days. 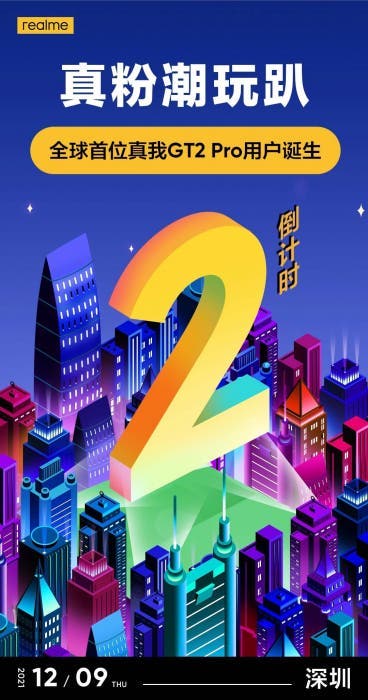 realme has worked closely with Qualcomm Technologies since its inception to bring dozens of high quality, powerful smartphones to consumers around the world from the 4G era to the 5G era. In 2021, realme was one of the first manufacturers to use Qualcomm Snapdragon 888 and 870G 5G Mobile Platforms. The realme GT Master Edition Explorer with Snapdragon 870; and realme GT with Snapdragon 888 have been widely available in many markets around the world.

realme will work with Qualcomm Technologies to bring new premium performance experience to young users around the world.