A few weeks ago Tecno was mocking Samsung on a Tecno Phantom X promo. It was inviting users to leave the “Samesong” behind and try something new. It’s not like Tecno has enough potential to put Samsung on its knees, so it was a big surprise to see the Transsion Holdings brand mocking the world’s largest smartphone maker. Now, in a sudden twist of facts, Tecno is reportedly working with the same Samsung to bring an RGBW camera sensor to its future smartphones.

Tecno held a webinar event a few years ago when it detailed its upcoming sensor co-developed with Samsung. Samsung’s ISOCELL GWB was briefly detailed on stage and its main feature is the RGBW color filter. The new 64 MP sensor adds a white sub-pixel to red, green, and blue array which should result in improved light sensitivity and better performance in low light scenes. The upcoming sensor is expected for a 2022 Tecno smartphone. 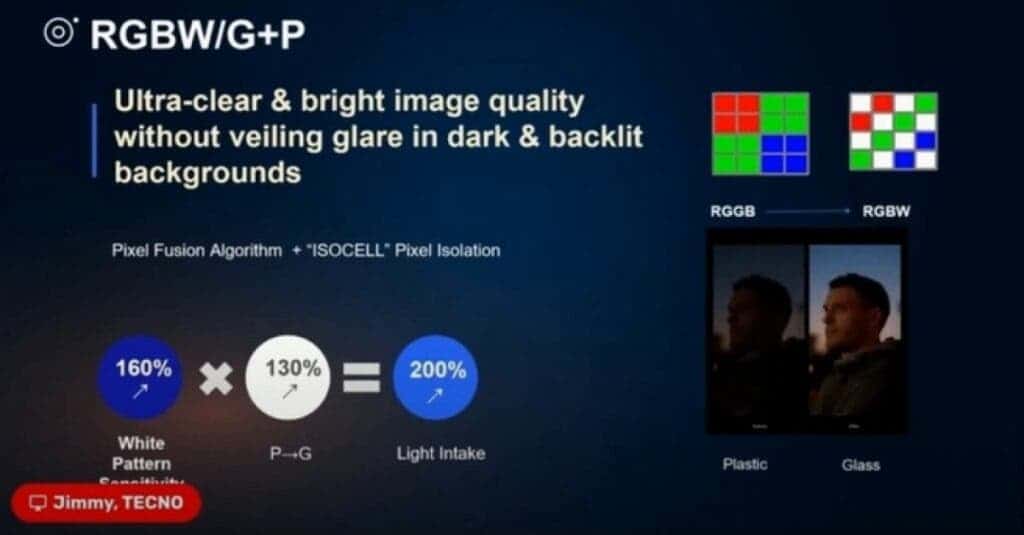 Worth noting that other companies such as Sony, Huawei, Vivo, and Oppo have been experimenting with RGBW sensors in the past. Huawei has been achieving impressive results in recent years, despite the continuing challenges to keep its relevance in the market. Samsung wants to overcome these companies offering a new level of quality with its upcoming sensor. There have been rumors of Samsung working on a 50 MP RGBW sensor for the Samsung Galaxy S22 series which is likely a different module.

Many smartphones in 2022 will bet on Samsung cameras

Samsung is currently behind some of the most advanced camera modules in the smartphone industry. However, it’s not common to see many of these sensors inside of Galaxy smartphones. The brand has been improving its game with more of its top-notch cameras in recent Galaxy releases. Also, the upcoming Galaxy S22 series will finally ditch the non-appealing 12 MP cameras in favor o something better. However, they’re still not bringing smartphones with 200 MP cameras as previous rumors have pointed.

Read Also:  Samsung is ready to rewrite the future of smartphones with the Galaxy S22

Although Samsung keeps neglecting its cameras, we may see other companies like Xiaomi and even Motorola bringing smartphones with 200 MP cameras in the next year. Tecno may also bring more appealing cameras and will rely on Samsung. We also expect Infinix to benefit from this partnership as the brand also belongs to the same Transsion conglomerate.