Vivo is busy with the launch of its iQOO smartphones and also with the release of its S12 series and Watch 2. However, there is still room for another lineup in the company’s schedule. Earlier this year, the brand introduced the Vivo V21 series in India and other markets. It recently launched the Vivo V23e in some markets which basically debuted a new range of devices for the V-series. The company is yet to disclose more details but we can also expect a Vivo V23 and a V23 Pro to come soon. The Pro variant is expected to arrive in India in January. Today, this particular has passed through the Geekbench benchmark.

Vivo V23 Pro will launch in January 2022. Ahead of the official unveiling, the phone is listed on Geekbench with the model number V2132. The listing reveals the performance unit details of the upcoming Vivo handset. According to the information, the phone runs the MediaTek MT6893Z SoC. For those unaware, this is another way for calling the MediaTek Dimensity 1200 SoC which has been present in a multitude of flagship smartphones this year. We assume that more brands will start using it in 2022 for cheaper models and that is very good. This chip is made on a 6 nm process and brings ARM Cortex-A78 cores clocked at 3.0 GHz clock speed. There are three ARM Cortex-A78 cores clocked at 2.4 GHz and four ARM Cortex-A55 cores clocked at 2.0 GHz. 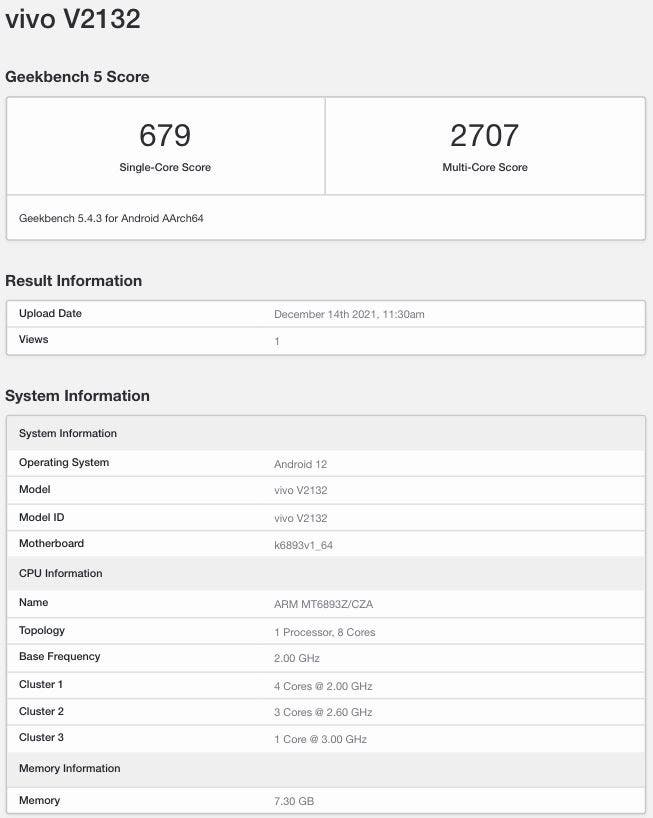 In addition to processing power, the handset also runs Geekbench with 8 GB of RAM. We can expect Vivo to launch more RAM and storage options for the handset as well. It will come with Android 12 straight out of the box. Depending on the region, the phone will run Funtouch OS 12 or Origin OS Ocean on top of Android. The phone has scored 679 points in the single-core tests and 2,707 in the multi-core department.

According to a recent report, the handset has a 64 MP primary camera. This is pretty much on par with previous releases in this lineup. Moreover, we can also expect an equally impressive selfie camera. After all, the focus of the V-series is offering remarkable selfie cameras. There is still plenty of time before the release of the upcoming device. According to rumors, the official release will happen on January 4. Of course, we can expect Vivo to disclose teasers ahead of any release.