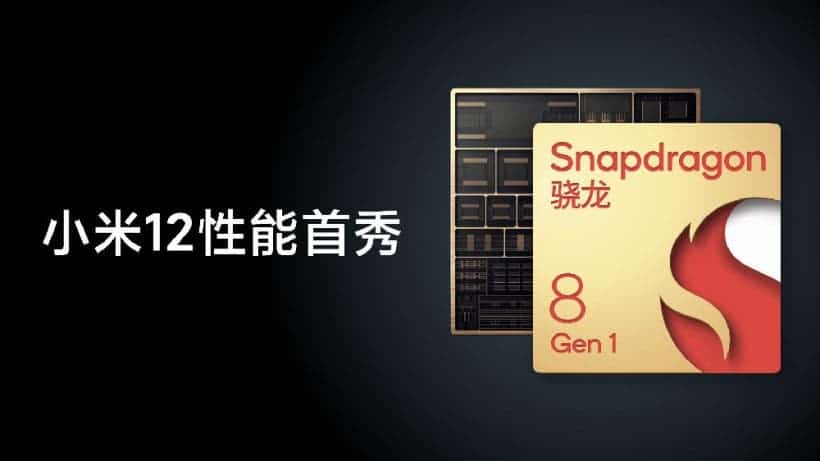 This new processor not only uses the world’s leading 4nm process but also carries the new Armv9 instruction. It upgrades its three-cluster CPU architecture and the new generation Adreno GPU performance is high. This is in addition to its new generation AI engines with Qualcomm’s first 18bit imaging system for mobile phones. Let us now take a look at the top 5 upgrades that the Xiaomi 12 series will bring.

It is important to note that some of the discussion on Snapdragon 8 Gen1 is with respect to the Xiaomi 12 series. Xiaomi and Qualcomm did further collaborative optimizations on this chip to get some of the results below.

The Snapdragon 8 Gen1 on the Xiaomi 12 series uses Samsung’s 4nm process. The advanced technology level has brought the number of transistors to a higher level. At the same time, the CPU three-cluster architecture is significantly better. The CPU performance increases by about 20% while the power consumption reduces by 30%. 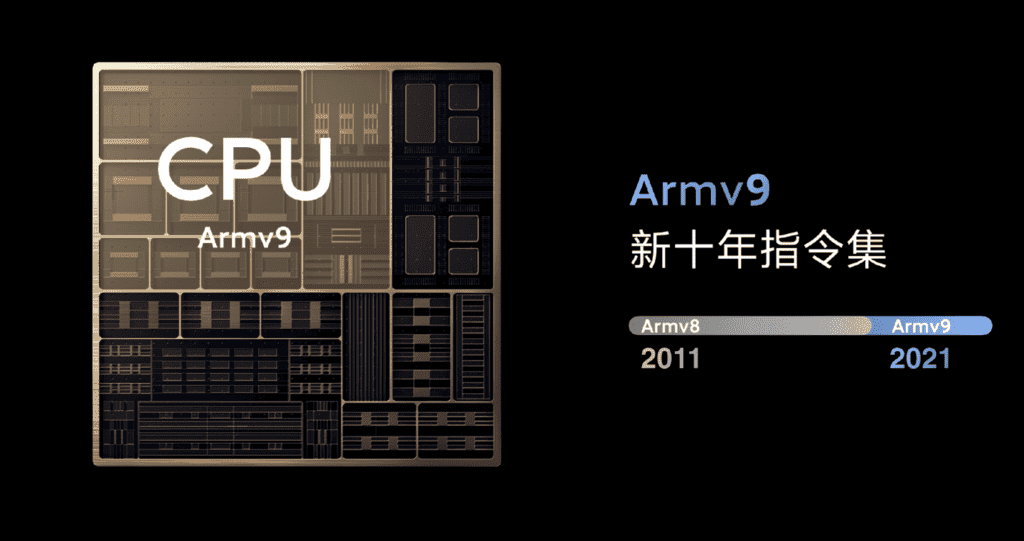 The most important basic change in the CPU is the adoption of the new Armv9 instruction set. This is the first major update to the instruction set since Armv8 was released in 2011. Armv8 has allowed the entire mobile ecosystem to quickly enter 64-bit, and it has played an indispensable role in the past ten years. Armv9 defines the direction of the new decade and provides a new SVE2 instruction set extension. This allows many advanced algorithms written for large servers and even supercomputers to run on mobile platforms such as smartphones. 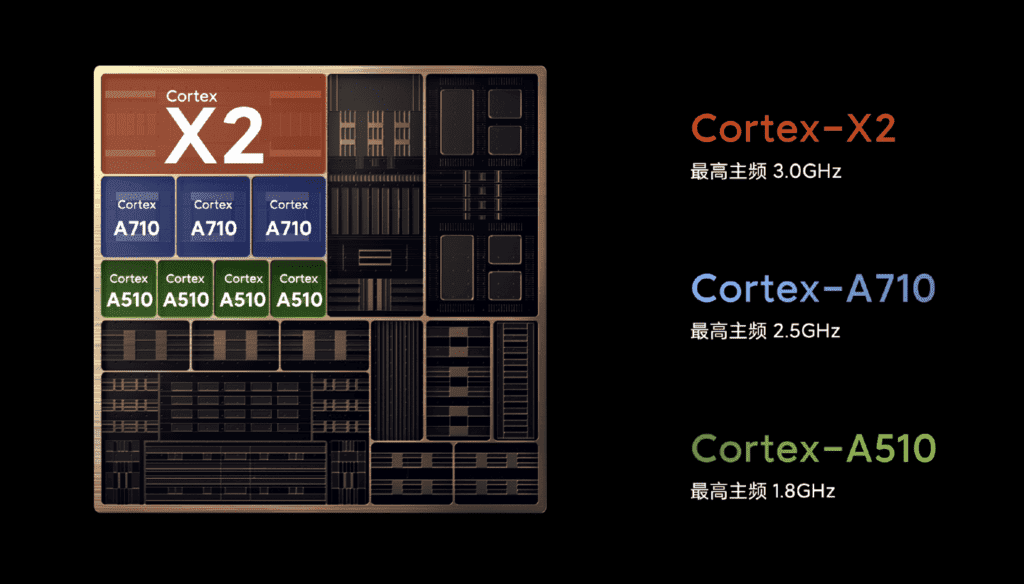 Based on the architecture upgrade of the new instruction set, all the cores of the new generation of Snapdragon 8 Gen1 have been refreshed.

Xiaomi Lab used SPECint2006 for an actual measurement. The Cortex X1 super large core upgrades to Cortex X2, and the peak performance is 16% higher. The super large core now has a stronger speed. 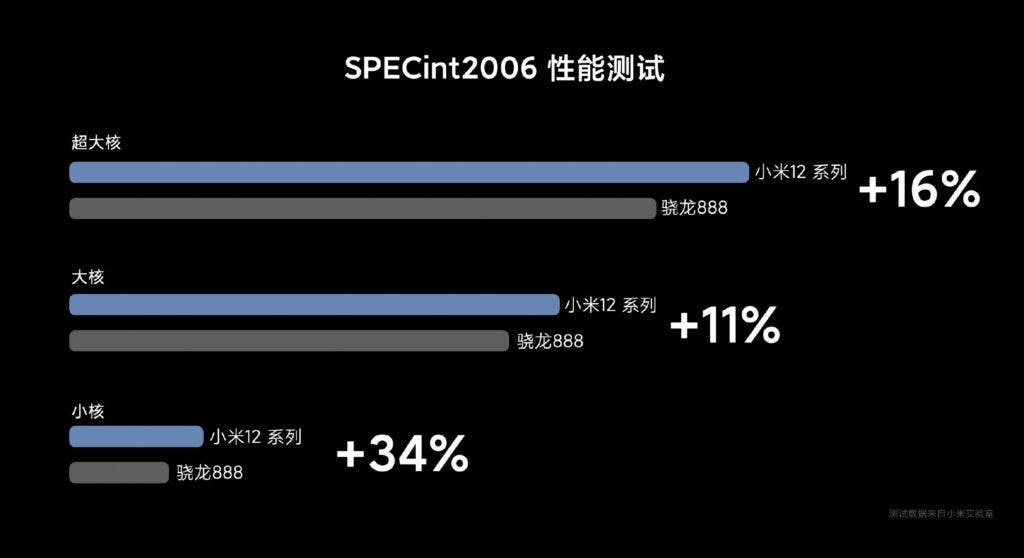 The most pleasant surprise is the upgrade of the small core. The new generation Snapdragon 8 Gen1 upgrades the A55 core that has been used for several years to the new A510 core, with a performance increase of 34%.

In terms of GPU, the new generation Snapdragon 8 Gen1 also has some improvements. The performance improvement of the new Adreno GPU can be described as brute force. Qualcomm has always had a strong performance on the mobile platform GPU. This time, it will not be any different. The GPU on the new generation of Snapdragon 8 expunges the traditional three-digit naming. This time, it is known as the “new generation Adreno GPU”. Like the CPU, the entire GPU architecture has undergone a major upgrade. 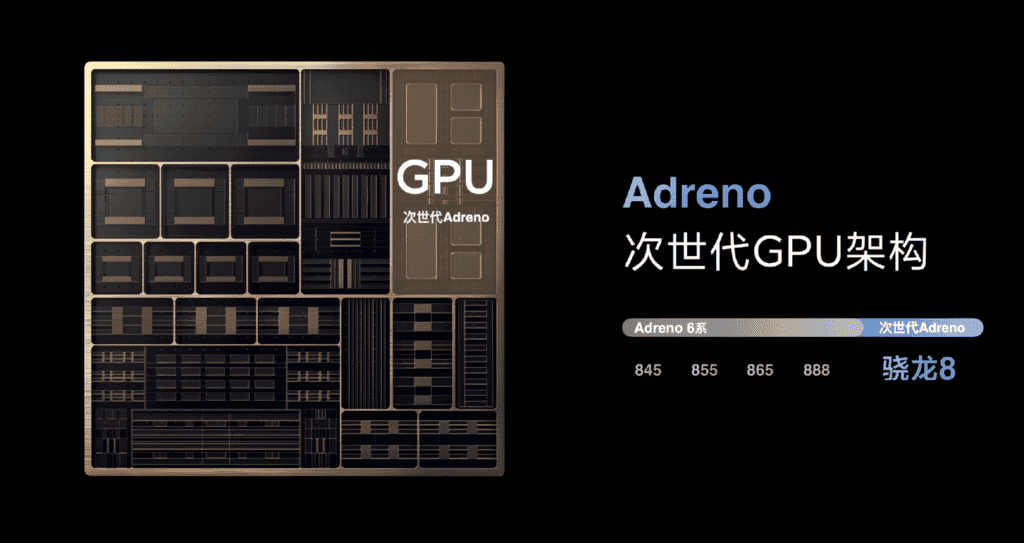 Relative to the SD888 (Andreno 660), Snapdragon 8 Gen1 GPU has a 30% increase in its graphics rendering speed. Furthermore, its power consumption reduces by 25%, and the Vulkan rendering performance increases by as much as 60%. With enhanced VRS and Snapdragon Elite Gaming technology, the new generation of Adreno GPU is one of the strongest gaming performance chips in Android chip history. 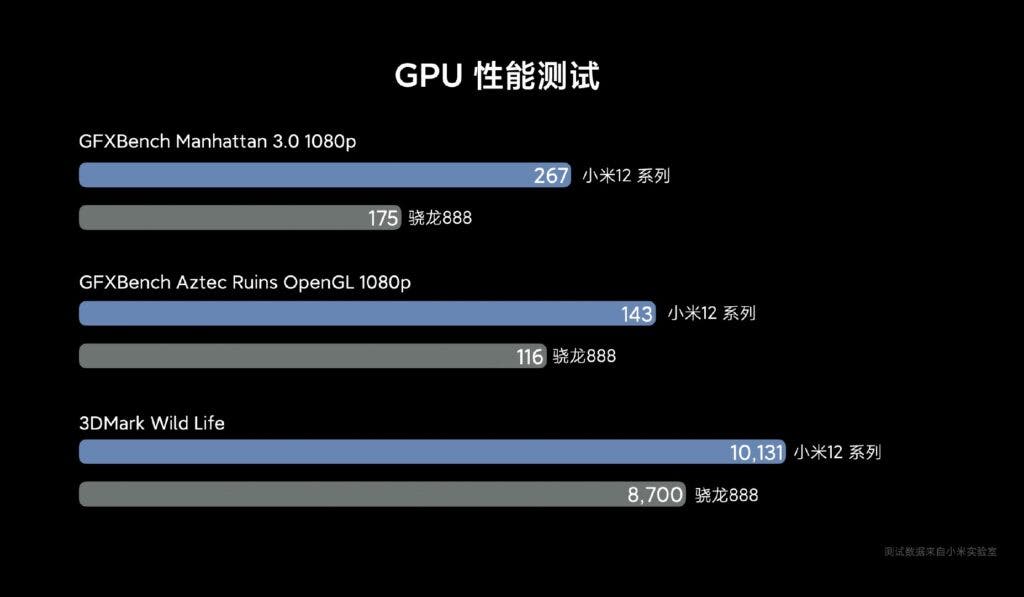 According to the latest performance test of Xiaomi Labs, GFXbench’s Manhattan 3.0 off-screen scene, Aztec Ruins scene, and 3DMark’s Wild Life scene test results, the Xiaomi 12 series is significantly ahead of the previous generation Snapdragon 888 in many scenes. The model hit a new high, as its Manhattan 3.0 increases by 52%.

While the performance is improved, the energy consumption ratio of the new generation of Snapdragon 8 Gen1 GPU is also better, and the measured power consumption is significantly lower than that of the Snapdragon 888 under the same performance. This means that the heat control of the new chip will be better.

The new generation Adreno GPU also provides more advanced graphics feature support for the Xiaomi 12 series. The Variable Rate Shading feature on SD888 upgrades to VSR Pro on Snapdragon 8 Gen1. The new VRS Pro feature makes the scheduling of graphics resources more refined. It can be based on actual scenarios. VRS rendering is performed on specific locations in the screen, which improves performance while further reducing its impact on the screen. 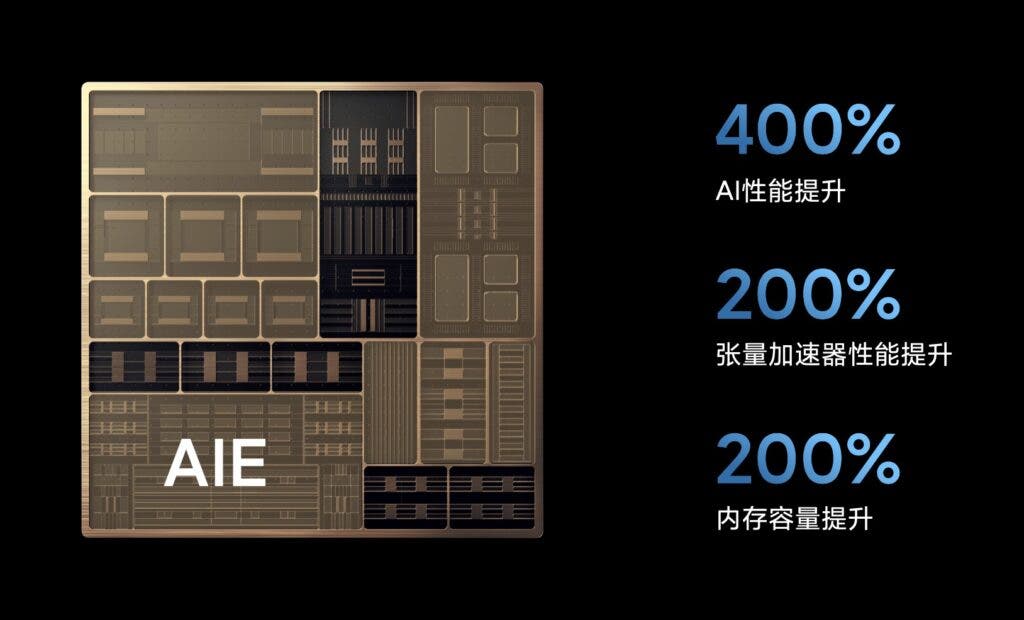 In Inceptionv3, Mobilent_v2, Resnet50, and VDSR tests, this chip achieves more than twice the performance improvement, up to a maximum of more than four times.

Qualcomm has also added a new AI low-power subsystem for the new generation of Snapdragon 8 Gen1 sensor hub modules. This includes AI processors, DSP, memory, and other modules. These modules can handle voice, sensor connection, and other scenarios with low power consumption. 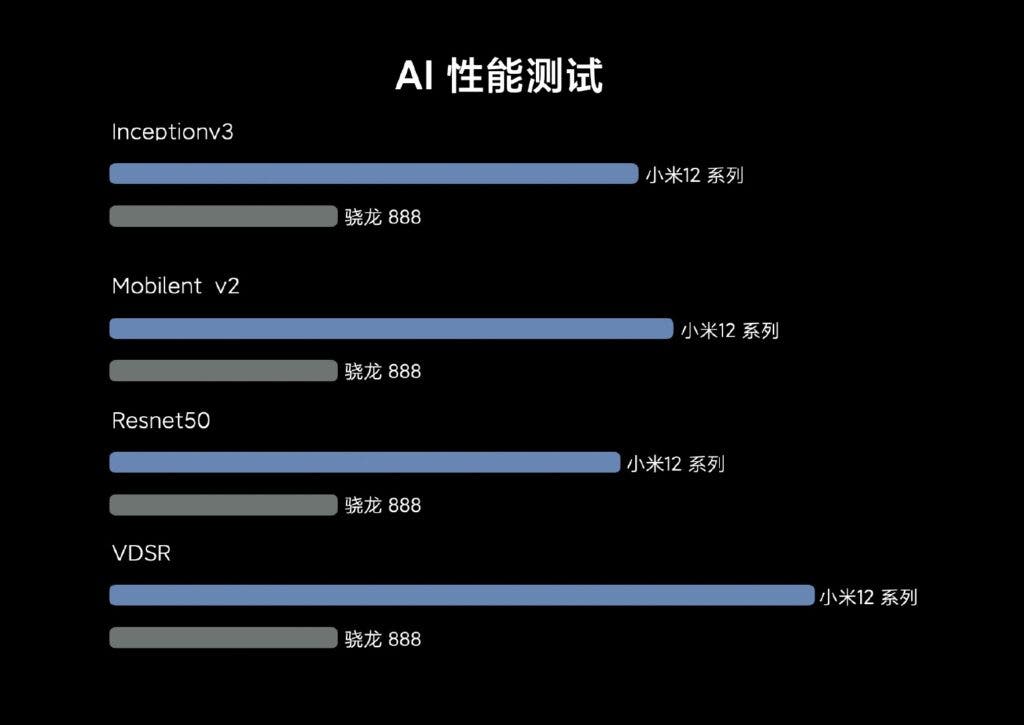 In addition, the new generation of Snapdragon 8 Gen1 also adds an always-on low-power ISP, which can be connected to an external camera. This allows the camera to be always on. Combining with the front camera can bring more privacy and security features to users. Overall, the performance of the sensor hub module increases by 75%, while power consumption reduces by 50%.

The Snapdragon 8 Gen1 has the same huge improvement in imaging capabilities. The new generation Spectra ISP adopts a three-way ISP design, which can process up to 18bit data. This is up to 4096 times higher than the previous generation 14bit. It is also Qualcomm’s first 18bit imaging system for mobile phones.

Up to 18-bit data sampling brings a higher dynamic range performance. Compared with 14-bit data, users can see more dark details, while highlight details are also preserved. The 18bit processing pipeline can also make the 10bit perform better. By controlling the dark area and the bright area under 10bit for exposure, it can merge into a more beautiful and outstanding photo.

In order to improve the performance in low-light environments, this ISP system also supports the “Mega Multi-Frame Engine”. This feature can capture up to 30 frames and perform sample stacking. This results in higher brightness and higher image quality. In comparison, the previous generation of Snapdragon 888 only 20% relative to the Snapdragon 8 Gen1.

The new generation Spectra ISP also incorporates more AI capabilities this time. The AI ​​face recognition capability upgrades from Snapdragon 888’s 115 points to 300 points. Furthermore, the recognition speed also reduces from 24ms to 6ms, an increase of up to 300%.

In terms of video, the new-generation Spectra ISP can support up to 8K HDR shooting. At the same time, when shooting HDR scenes, the ISP power consumption is greatly reduced by 50%. With the support of ultra-large bandwidth, it can record up to 64MP while recording 8K video. With the internal optimizations, the Xiaomi 12 series will bring an unprecedented evolution in imaging.

As the world’s leading 5G platform solution, the Snapdragon 8 Gen1 comes with the fourth-generation 5G modem X65. For the first time, the downlink rate increases to 10Gbps, which is what we usually understand as 10 Gigabit network speed. On the upstream side, X65 can also support transmission rates up to 3.5Gbps.

In addition, Snapdragon X65 is also the first modem and radiofrequency system that complies with 3GPP Release 16 specifications. It also has an upgradable structure that can be customized and expanded in various segments of the world. Qualcomm’s leadership in the field of communications also helps the Xiaomi 12 series to set a new high in multi-dimensional speed. At the same time, the overall performance is more stable.

Obviously, the Snapdragon 8 Gen1 did not just change its naming method, but also the innovation inside and out. Whether it is CPU or GPU, ISP, AI, and connectivity, there have been leap-forward improvements. Such a versatile and powerful platform is bound to become the heart of the surging power of the Xiaomi 12 series.

With the powerful performance of the platform coupled with Xiaomi’s meticulous and professional tuning strategy, the Xiaomi 12 series is not only faster but also achieves continuous and stable performance output. Regarding performance, Xiaomi will have more surprises to share with you at the press conference.